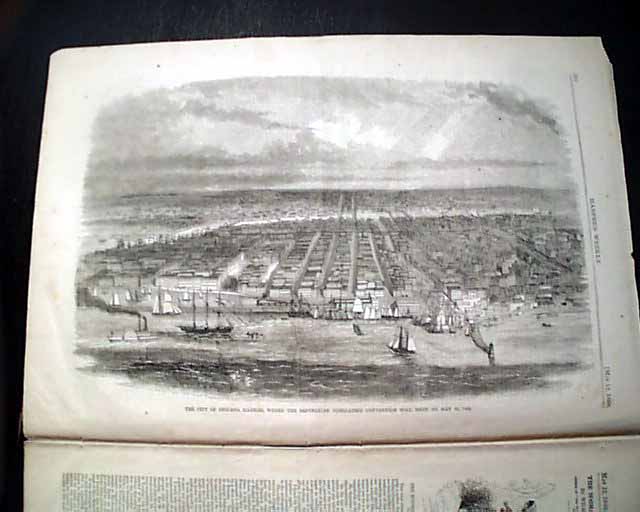 
HARPER'S WEEKLY, New York, May 12, 1860  The front page has a print of: "The Republican Wigwam At Chicago, Illinois, In Which the Republican Convention Will Be Held, May 16, 1860".  This was the event at which Abraham Lincoln would go from near obscurity to a position of prominence in American history.
The doublepage centerfold is a terrific print captioned: "Prominent Candidates For The Republican Presidential Nomination At Chicago" which includes portraits of eleven men, of central prominence being: "Seward" with a print of "Lincoln" near the lower-left (see). This is one of the earlier prints of Lincoln to be had in any newspaper, and shows him beardless, again an image not typically found. Also in this doublepage is a view of: "Washington".
Another full page print is: "The City Of Chicago, Illinois, Where The Republican Nominating Convention Will Meet On May 16, 1860", plus a half page of: "Meeting of the Southern Seceders From the Democratic Convention at St. Andrew's Hall, Charleston". There is also a small print of: "Hon. Caleb Cushing, President of the Democratic Nominating Convention". The back page has 2 political cartoons.
Sixteen pages, never bound nor trimmed, just as sold on the streets (rare as such). Nice condition.