Home > Back to Search Results > Creating the state of Kentucky... Constitution of Georgia...
Click image to enlarge 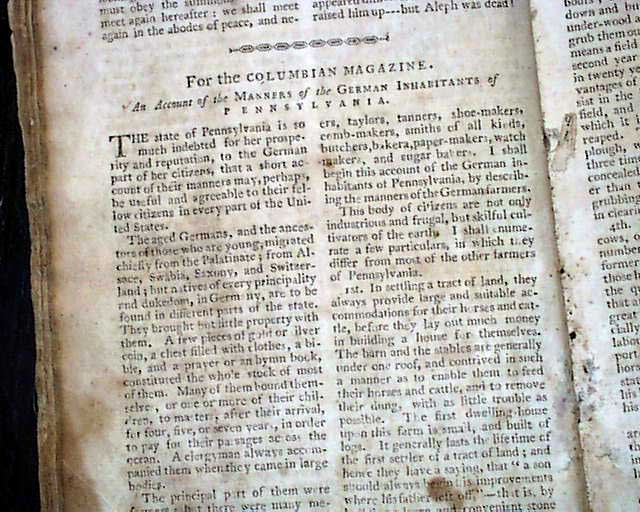 Creating the state of Kentucky... Constitution of Georgia...

* State of Georgia constitution
* Creating the State of Kentucky

Among the articles are: "An Account of the Manners of the German Inhabitants of Pennsylvania" which takes 7 1/2 pages. Also a full page chart of the: "Moral and Physical Thermometer".
Near the back is "The Chronicle" with the latest news of the day including 8 pages of report under the heading: "United States" presented state-by-state. Several states report the election of representatives to the new federal government. Also: "An Act Concerning the Erection of Kentucky into an Independent State" as well as: "The Constitution of the State of Georgia". There is even a report from the "Western Territories".
Lacking both plates called for.
Complete in 76 pages, no title/contents page with a library stamp at the top of page 1, some dirtiness and various foxing, some tears at margins, 5 by 8 inches. There is an error in page numbering near the back.