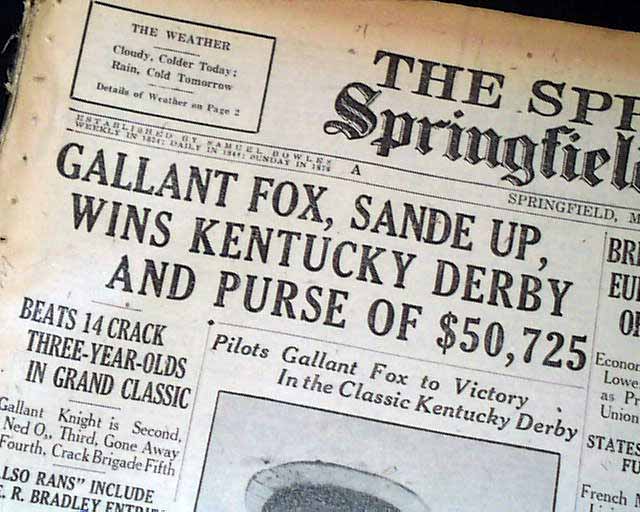 Born at Claiborne Farm in Paris, Kentucky by Sir Gallahad III out of the mare Marguerite, Gallant Fox was a bay colt who became the second horse to win the U.S. Triple Crown.

Owned by the Belair Stud of Collington, Maryland, Gallant Fox was ridden by Earl Sande and trained by Sunny Jim Fitzsimmons. After a mediocre campaign as a two-year-old, he was a winner at three in 9 out of 10 races; among them the 1930 Lawrence Realization Stakes, the Wood Memorial Stakes and the Triple Crown races: the Kentucky Derby, Preakness Stakes, and the Belmont Stakes. He also won the Jockey Club Gold Cup. His only loss that year was to a 100 to 1 shot, Jim Dandy, in the Travers Stakes.

Gallant Fox was retired to stud after the 1930 racing season and stood at stud for 22 years. Among his progeny were 1935 Triple Crown winner Omaha and Granville, the 1936 Kentucky Derby champion and that year's Horse of the Year. As well, he sired Flares who in 1938 became only the second American-bred to ever win England's Ascot Gold Cup.

Gallant Fox died on November 13, 1953, and was buried at Claiborne Farm. In 1957, he was inducted into the National Museum of Racing and Hall of Fame. The The Blood-Horse magazine ranking of the top 100 U.S. thoroughbred champions of the 20th Century listed Gallant Fox at #28.