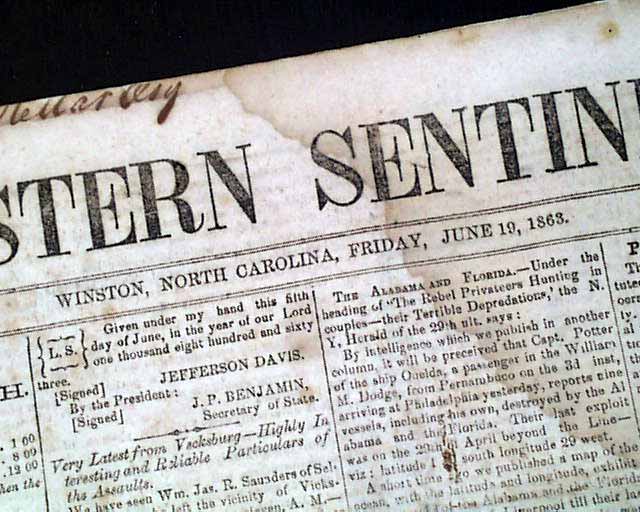 The ftpg. contains a first column report headed: "Dismissal of the British Consul at Richmond" which concerns President Jefferson Davis revoking George Moore's duties as an agent for the Confederacy in England. This is following by a related document headed; "Letters Patent -- Revoking Exequator of George Moore, Her Britannic Majesty's Consul at Richmond" which is signed in type: Jefferson Davis, and J. P. Benjamin, Secretary of State.
The ftpg. also has some nice Civil War reports with heads:
"Very Latest from Vicksburg--Highly Interesting & Reliable Particulars of the Assaults" which takes nearly a full column. Also: "Gen. Pemberton to his Army" "The Alabama and Florida" "Deserter Shot" "Peace Movement at the North" and "Confederate Money" & a bit more.
Civil War reporting carries over to pg. 2 with: "The News" which has a variety of reports including: "A Call for More Troops" from President Jefferson Davis; "Confederate Tax Collector" "The Very Latest News" and a document signed in type: Jefferson Davis (see photos).
Page 3 has: "The Cavalry Fight on Tuesday" near Brady Station; "The Situation Our West" "The War In Tennessee" and: "A Proclamation" signed by the governor of North Carolina.
The bkpg. also has Civil War reports including an interesting: "Exchange Notice No. 5" concerning the exchange of prisoners (see), and another "Proclamation" by the gov. of N.C., plus other items.
Complete in 4 pgs., a light water stain in the upper right of each leaf, a bit irregular at the blank spine margin, otherwise in nice condition. An opportunity for not only a very rare Confederate title, but one with some fine content.