Home > Back to Search Results > Major Rogers captured by Indians, then escapes...
Click image to enlarge 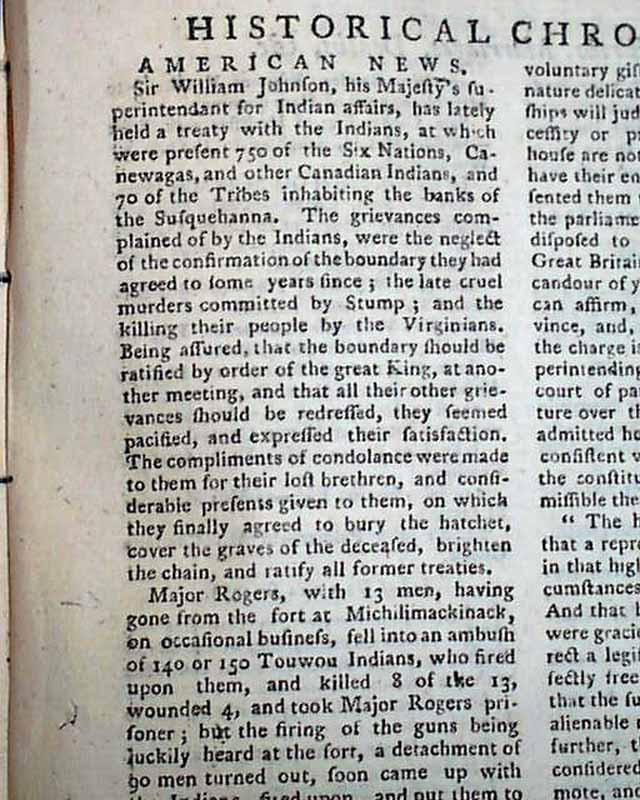 Item # 652296 THE GENTLEMAN'S MAGAZINE, London, June, 1768  Among the items in this issue are: "Unsuccessful Trial to Cure Canine Madness" "An Account of the Antiquities of Athens" "Dr. P's Discoveries Concerning the Rhinoceros Justified" "List of Members in the Present Parliament" which takes 8 pages. Also: "An Account of the Horned Viper of Egypt" which includes a nice plate of it which folds out to measure 8 1/2 by 10 inches & is in very nice condition; "Letter From New England to Lord Shelburne" which takes a full page (see for portions).
Near the back is the "Historical Chronicle" which has the latest news reports of the day & which includes just over a full page headed "American News". It includes reports of a treaty with Indians, and that: "...Major Rogers, with 13 men, having gone from the fort at Michilimackinack...fell into an ambush of 140 or 150 Touwou Indians who fired upon them & killed 8 of the 13...and took Major Rogers prisoner...a detachment of 990 men turned out...During the last skirmish Major Rogers found an opportunity to escape." (see) Other American content as well.
Complete in 56 pages, 5 by 8 inches, full title/contents page featuring an engraving of St. John's Gate, very nice condition.

A very nice magazine from the "mother country" from this troublesome year between the Stamp Act & the Boston Massacre, with a wide range of varied content. This was the first periodical to use the word "magazine" in its title, having begun in 1731 and lasting until 1907.