Home > Back to Search Results > Rhode Island is obstinate in apporoving the Constitution...
Click image to enlarge 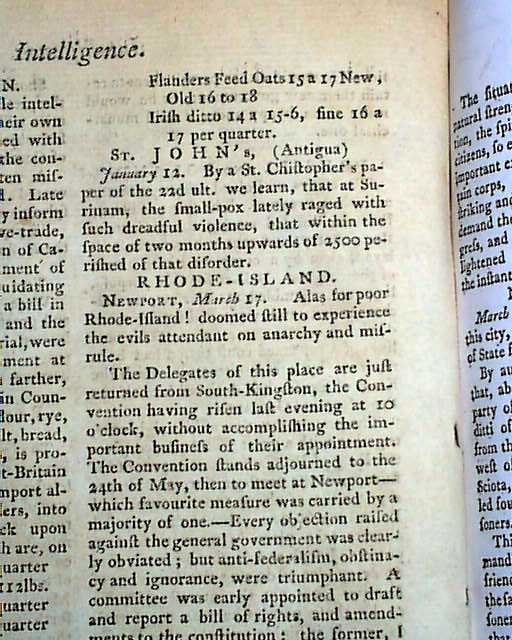 Rhode Island is obstinate in apporoving the Constitution...

Included is an unusual illustration (rarely found in 18th century magazines) of a chamber lamp, within the descriptive text. Other items include: "Character of General Lee" "Female Heroism: or Magnanimity of the Whig Lades in Charleston when that City was in the Hands of the British" "On Comets"  & much more.
Near the back is: "The Chronicle" with the latest news of the day including much on the French Revolution, with a section headed: "United States" with American news from Bennington, Vt.; New York, Richmond, Columbia, S.C.; & Philadelphia.
A report from Newport, R.I. discusses that state's intransigence in ratifying the Constitution. A few bits include: "...Every objection raised against the general government was clearly obviated; but anti-federalism, obstinacy and ignorance were triumphant...Where any thing new has been introduced, stupidity is the characteristic feature...". Rhode Is. would approve the Constitution in May.
Note: the last two leaves are present in photocopy which includes news reports from America and the meteorological chart.
Complete in 72 pages, disbound, full title/contents page, no plates are called for but there are 3 pages of music & the back leaf is filled with meteorological charts for Phila. & Charleston. Measures 5 1/4 by 8 1/4 inches, some dirtiness to the title/contents page .

This title has the honor of being the first successful American magazine, having begun in September, 1786 and lasting until December, 1792. Although many titles existed earlier, none enjoyed the success of lasting beyond a few issues or a few years.