Home > Back to Search Results > First use of insanity plea... Nellie Bly...
Click image to enlarge 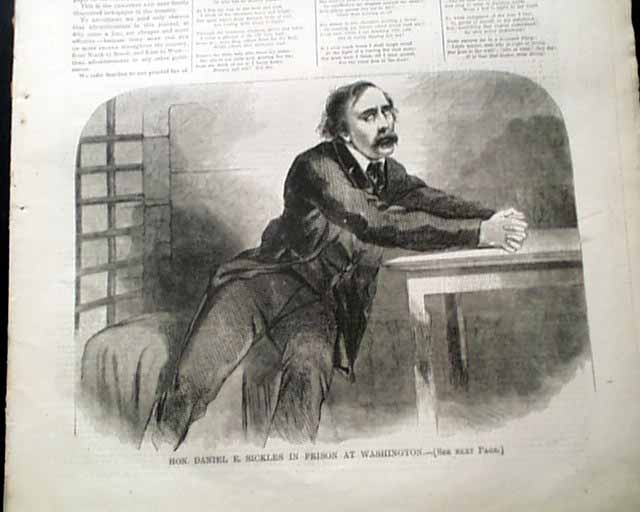 
HARPER'S WEEKLY, New York, March 19, 1859  The front page shows: 'Hon. Daniel E. Sickles in Prison at Washington', who was the first person to plead temporary insanity in a murder case. He would be acquitted. There is a related article on page 2 titled: "The Washington Tragedy".
Also of significance is the 2 1/2 page article with ten illustrations titled "A Visit To The Lunatic Asylum On Blackwell's Island". Some 28 years later investigative reporter Nellie Bly would rise to journalistic fame by posing as an "insane" patient to be committed to the female asylum there and exposing cruelty towards patients and horrendous medical care. Her work would lead to much reform.
Other prints include a full page with 9 illustration of: "The New York Metropolitan Police" "View of the Batteries at Humaita, on the Paraguay River" a: "Plan of the Paraguayan Fortifications at Humairta" a halfpg: "The Exchange at Buenos Ayres" a small print of: "The Late Postmaster-General, Hon. A. V. Brown". The back page has two cartoons.
Complete in 16 pages, in uncommon never-bound, never-trimmed state, nice condition.