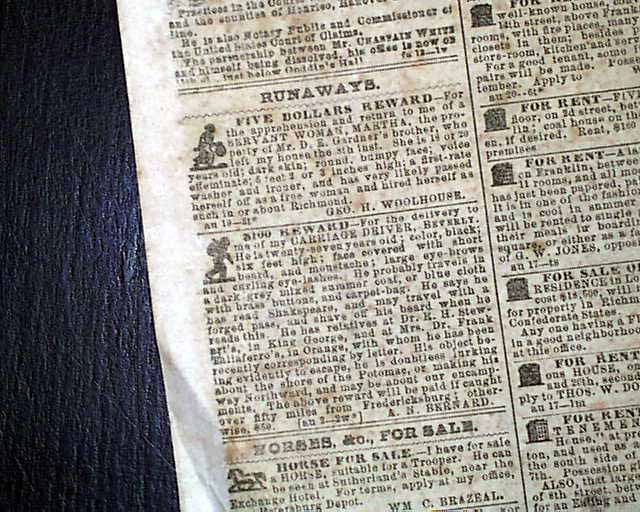 A nice newspaper from the capital of the Confederacy. Much of the front page is taken up with: "Finances Of Confederate Government" taking over 2 1/2 columns. Also on the ftpg: "The Call for Militia", "Hessian Deviltry at Harper's Ferry, Va." and "A Call Upon the Ladies of Richmond". The front page also has two illustrated runaway reward ads and many recruiting ads as well.
The war news continues on the inside with: "The Importance of Sanitary Regulations for the Army", "Coast Defences---Marine & Water Batteries", "The Virginia Seaboard", "Educated Officers", "From Lynchburg", "Extortioners Fleecing the Sick & Wounded", "Skirmish at Harper's Ferry", "The Battle of Manassas" and much, much more. The back page has: "To the Ladies of Richmond".
Complete as a four page issue, never bound nor trimmed, various foxing, generally nice.