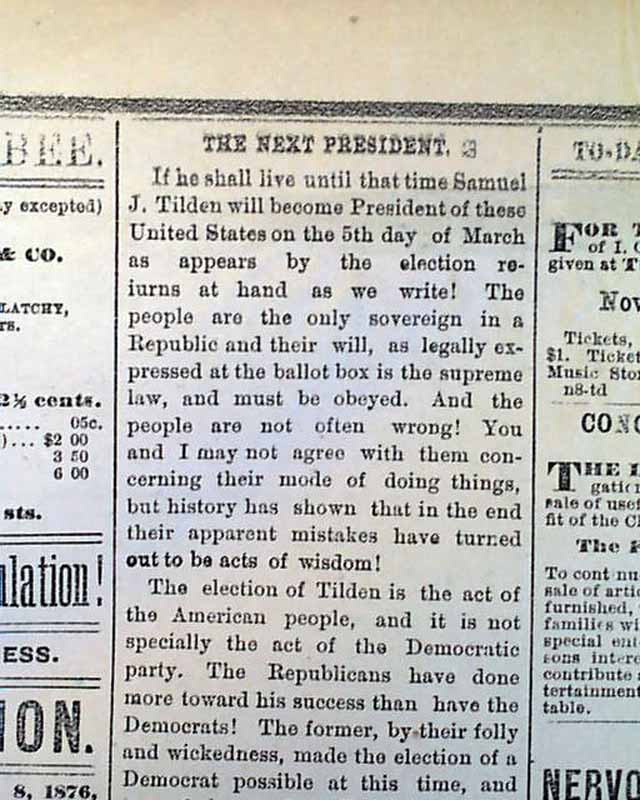 
THE DAILY BEE, Sacramento, Nov. 8, 1876  Page two of this issue contains the column headline "THE NEXT PRESIDENT" and reports "If he shall live until that time Samuel J. Tilden will become President of these United States on the 5th day of March as appears by the election returns at hand as we write! ... You and I may not agree with them concerning their mode of doing things, but history has shown that in the end their apparent mistakes have turned out to be acts of wisdom!..."  Page three carries an additional report "CALIFORNIA! - A Great Republican Victory! Oregon and Nevada Also - San Francisco Gives 793 Majority" and "TELEGRAPHIC! - To-day's Dispatches! - Telegrams of the Associated Press to the Daily Rec. - THE EAST! Returns from Nearly Every State! The South Not Solid! Wisconsin Republican! Hayes may be Elected by Florida - Result Yet in Doubt!". Other news and advertisements of the day is within.
Four pages, irregular at the spine, a few tiny margin edge tears, a delivery label is in the masthead. This should be handled with  care.