Home > Back to Search Results > Confederate newspaper reporting the fall of Savannah...
Click image to enlarge 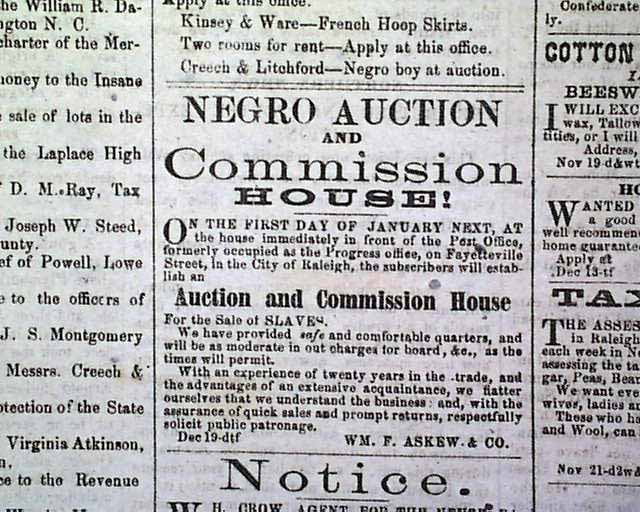 Raleigh was one of the last major cities of the South to fall into the hands of Sherman, surrendering on April 13, 1865 just one day before Lincoln was assassinated. This rare Confederate title is from the latter months of the Civil War.
The front page includes: "From Wilmington--Attack of the Enemy" "From Richmond" which includes two dispatches reporting on battles, each signed in type: R. E. Lee. One of Lee's dispatches ends with: "...Our troops are bearing fatigue and exposure with great cheerfulness. The damage to the works can soon be repaired. Many bridges & depots on the railroad have been burned." (see). There is also a lengthy list of Laws & Resolutions recently passed by the Confederate Congress, as well as a lengthy act titled: "An Act To Increase the Efficiency of the Home Guard Organization". Among the front page ads is: "Negro Auction and Commission House...For the Sale of Slaves..." (see photos).
But certainly the most notable content in this issue is the lengthy back page report headed: "WAR NEWS" "The Fall Of Savannah". It includes much interesting reading with bits including: "...that Savannah was successfully evacuated on Tuesday night...several assaults were made upon our lines but were repulsed signally...The Fort was attacked on the North side by Sherman's forces...After Sherman captured the fort he communicated with the fleet...No demand was made for the surrender of the city until Saturday. On that day he demanded unconditional surrender of the city. General Beauregard in substance informed him that 'he knew the way to the city & could take it if he was able.' Gen. Beauregard left the city on Sunday. The residents of Savannah did not expect that the city would be captured. They were totally unprepared for such a result...Both of the printing offices in the city fell into the hands of the Yankees..." plus much more (see photos).
Plus there is much more war-related content on the back page, including: "The Butler & Porter Expedition" "Wilmington"; a lengthy letter signed in type by: W. T. Sherman concerning Savannah (see photos); a letter signed in type by: George H. Thomas; "The Latest from Tennessee" "Latest From Sherman's Army" "Sherman's March to the Sea" and more.
Complete as a single sheet newspaper, a very small hole causing by a paper-making flaw (not wear) affects perhaps 2 words, otherwise in very nice, clean condition.
Complete as a single sheet newspaper in very nice, clean condition.

Sherman is about to capture Savannah....