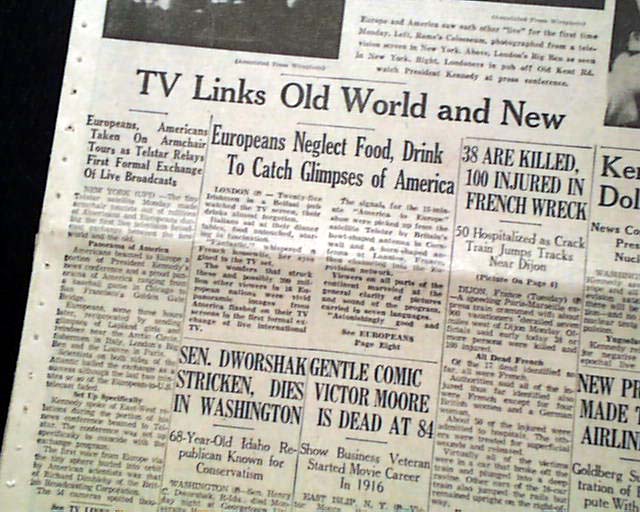 wikipedia notes: Telstar 1 relayed its first, and non-public, television pictures—a flag outside Andover Earth Station—to Pleumeur-Bodou on July 11, 1962. Almost two weeks later, on July 23, at 3:00 p.m. EDT, it relayed the first publicly available live transatlantic television signal. The broadcast was made possible in Europe by Eurovision and in North America by NBC, CBS, ABC, and the CBC. The first public broadcast featured CBS's Walter Cronkite and NBC's Chet Huntley in New York, and the BBC's Richard Dimbleby in Brussels. The first pictures were the Statue of Liberty in New York and the Eiffel Tower in Paris. The first broadcast was to have been remarks by President John F. Kennedy, but the signal was acquired before the president was ready, so engineers filled the lead-in time with a short segment of a televised game between the Philadelphia Phillies and the Chicago Cubs at Wrigley Field.