Home > Back to Search Results > Violence related to the seizing of "Exodus 1947"...
Click image to enlarge 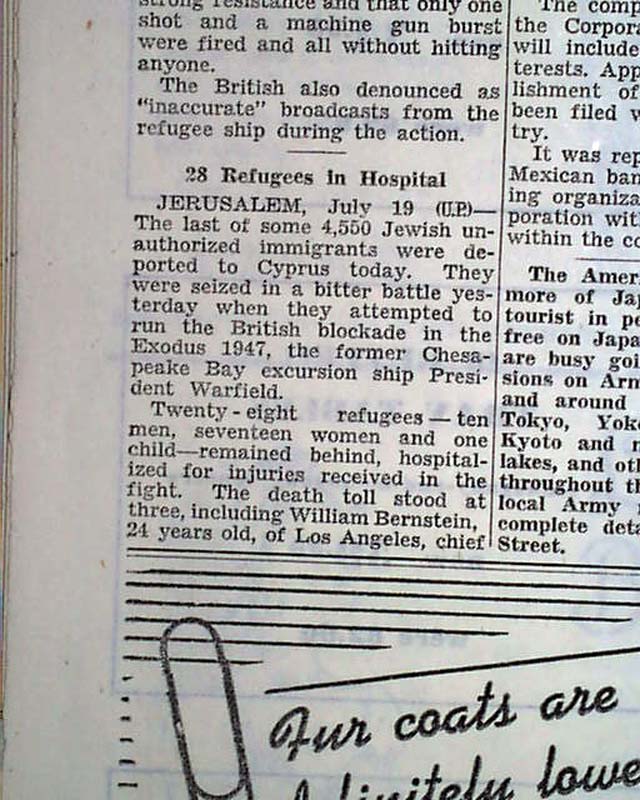 The front page, under: "World News Summarized," has the brief mention of two Judaica related items which appear in detail on pages 22 and 23. Page 22 has: "BRITISH CONSTABLE SHOT DEAD IN HAIFA," which tells of hostilities related to the boarding of the Jewish refuge vessel, Exodus 1947. Also included is, "28 Refugees In Hospital." Both provide details regarding the Exodus 1947 affair. Page 23 has, "BRITISH TELL U.N. JEWS BACK TERROR," with subheads: "Palestine Regime Charges That Community Claims Right to Gain Statehood by Force," "REPLY TO ZIONISTS FILED," and "Government Says They Conceal Truth - Jerusalem Activities of Inquiry Are completed."

Although unrelated, the front page has an interesting article, "KILLERS MOW DOWN PREMIER OF BURMA AND FIVE TOP AIDES."  Other news of the day is found throughout.

A Sunday edition printed on rag paper (for library/institutional use), in excellent condition. The issue is believed to be complete in multiple sections, but is being offered for the described content.