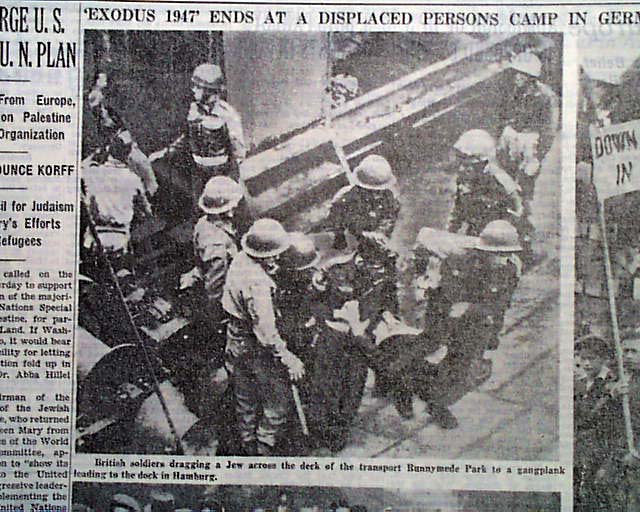 The front page has a historic report regarding the arrival of the Jewish refuges from the Exodus 1947 vessel, which had been captured by the British outside of Palestine. In a tragic twist of fate, the displaced refugees were relocated to Germany. The headline reads: "HOSES, TRUNCHEONS ROUT EXODUS JEWS IN BATTLE ON SHIP," with subheading: "24 Refuges Hurt resisting Forced Debarkation From 3rd Vessel at Hamburg - 50 Ringleaders Are Jailed - 3 Britons Injured...", which continues of page 3. Page 3 has additional related articles , including three large photos (see images).

Note: Wikipedia states: "The treatment of the refugees at the camps caused an international outcry after it was claimed that the conditions could be likened to German concentration camps."

The front page also has one column headings that include: "EXCURSION VESSEL BLOWS UP, KILLING 21 AT PITTSBURGH" "Two Violent Explosions Rip Craft at Dock and She Goes Blazing to River Bottom" and more with related photo (see) images. First report coverage on the excursion steamer "Island Queen" explosion on the Monongahela River at Pittsburgh, Pennsylvania. Always nice to have notable events in history reported in this World famous publication.
Other news, sports and advertisements of the day. Complete in 56 pages, nice condition.