Home > Back to Search Results > The Regulators of North Carolina have been quiet...
Click image to enlarge 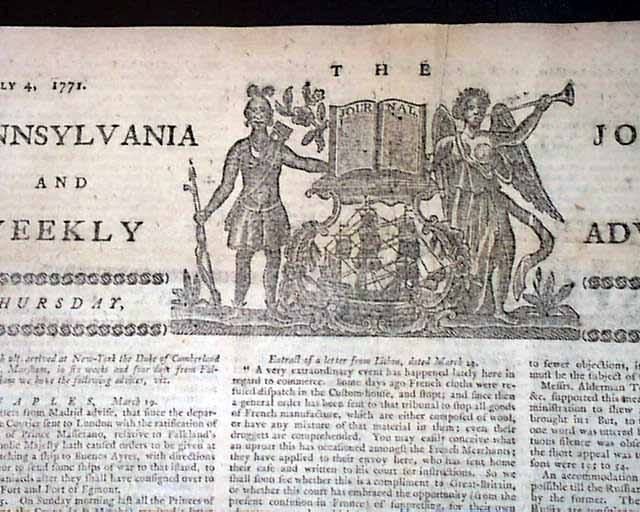 The Regulators of North Carolina have been quiet...

This newspaper features one of the larger & more decorative masthead engravings to be found in a colonial America newspaper.
Colonists certainly had no idea how the country & situation would change in just five years from this date!
The ftpg. is taken up with reports from London & Naples but includes one bit: "By a report made this week, it appears that the commerce of North America is now in a very flourishing condition."
Page 3 has news datelines from Boston, New York, and Philadelphia. One item mentions: "...from Wilmington, North Carolina...are informed that there had been no other rencounter between the Governor's forces & the Regulars..." and a bit more.
Included is a four page "Supplement" issue of the same date, taken up with news from London and advertisements. An upper corner of the supplement is lacking causing little loss.
Eight pages in total, some foxing, generally good condition.