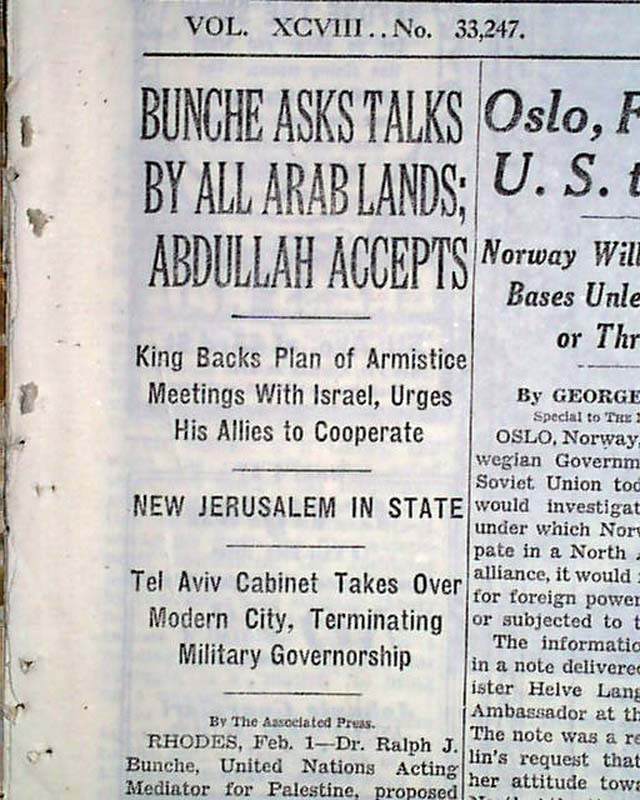 Trans-Jordan seeks peace following the U.S.' formal recognition of the State of Israel...


NEW YORK TIMES, February 2, 1949  Although the State of Israel was formally created in May, 1948, the United States and Trans-Jordan (current-day Jordan) did not formalize their recognition until much later. On January 31st, 1849 the U.S. did so, and although Jordan did not formally do so until 1994, this issue reports that on the day following Israel's recognition by the U.S., the King Abdullah of Trans-Jordan encouraged his Arab allies to seek peace with Israel - an act which would be complicit in his assassination 18 months later.

The front page has: "BUNCHE ASKS TALKS BY ALL ARAB LANDS; ABDULLAH ACCEPTS," with subheads: "King Backs Plan of Armistice Meetings With Israel, Urges His Allies to Cooperate," "NEW JERUSALEM IN STATE," "Tel-Aviv Cabinet Takes Over Modern City, Terminating Military Governorship." The text includes: "King Abdullah said that the proposed armistice conference with all the Arab nations might be the key to peace in Palestine. His Arab Legion was Israel's most powerful enemy in the Palestine War." Additional related coverage is found on both the front page and page 15, including the equally noteworthy: "Israel Assumes Rule in Modern Jerusalem; Decision Winds Up Military Government," along with the contrasting, "Egypt Thanks 3 Nations Not Recognizing Israel," these countries being India, Pakistan, and Ceylon (modern day Sri Lanka). See images for details.

These are very notable reports on Israeli relations in the region. Complete in 56 pages, very nice condition.