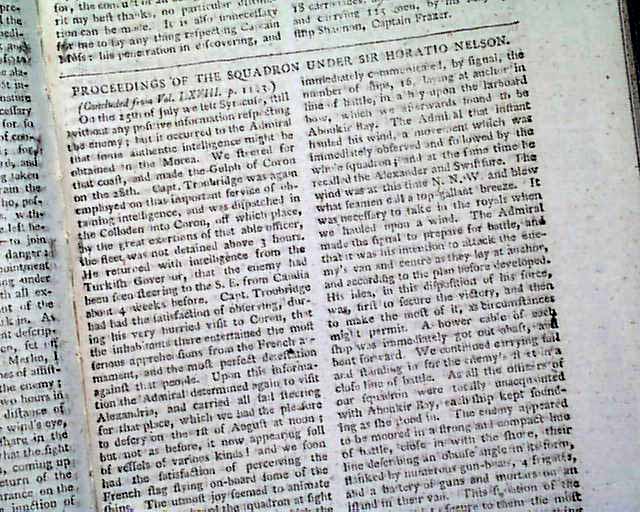 The prime content in this issue is the excellent and detailed account of Sir Horatio Nelson's victory over French at the Battle of the Nile, or the Battle of Aboukir Bay. This is actually part of a very lengthy continuing article from a previous issue. Included are two letters datelined form the Vanguard at the Mouth of the Nile, both dated Aug. 2, 1798. The first begins: "Almighty God having blessed his Majesty's arms with victory, the Admiral intends returning public thanksgiving for the same at 2 o'clock this day..." And the other begins: "The Admiral most heartily congratulates the captains, officers, seamen and marines of the squadron he has the honour to command on the event of the late action..." with more (see).
Complete in 88 pages including the two full page plates called for. Full title/contents page with an engraving of St. John's Gate, measures 5 by 8 1/2 inches. Slightly irregular at the spine, generally in very nice condition.