Home > Back to Search Results > Creating a statue of Washington... Loyalists in New York...
Click image to enlarge 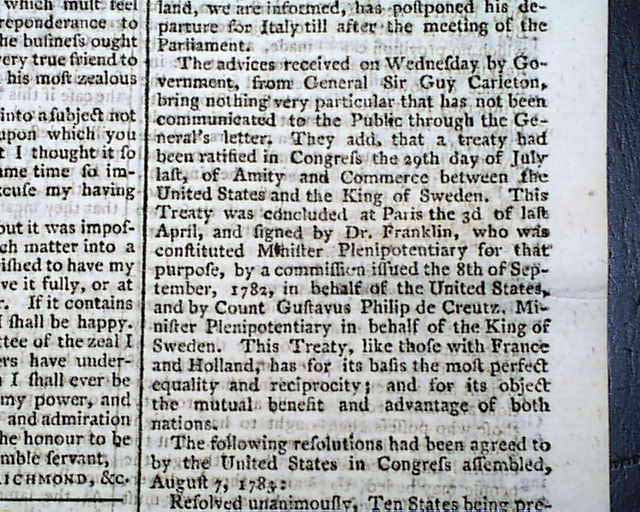 Creating a statue of Washington... Loyalists in New York...

Page 3 has a report noting in part: "...that a treaty had been ratified in Congress the 29th day of July last...between the U.S. and the King of Sweden. This Treaty was concluded at Paris...and signed by Dr. Franklin..." Also a resolution from Congress: "...That an equestrian statue of General Washington be erected at the place where the residence of Congress shall be established..." with various details. Also a letter from Boston concerning a congratulatory Address to be sent to General Washington. Then a letter from New York with notable content including: "The remaining Loyalists at New York who have got estates within the British lines are disposing of them as fast as possible at any price..." with more (see).
Another page has a report noting General Washington has made a tour of Crown Point, plus additional information concerning Major-General Baron Steuben.
Eight pages, 8 1/4 by 11 1/4 inches, very nice condition.