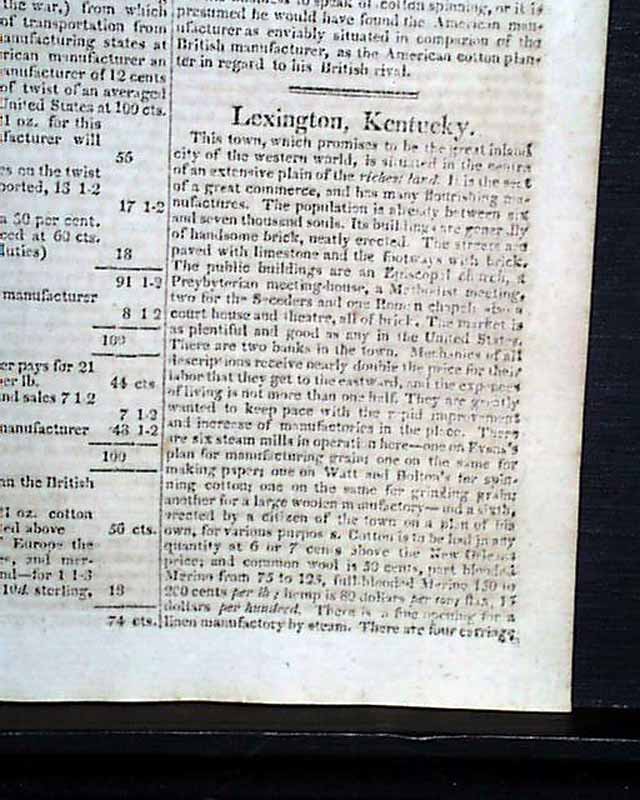 
NILES' WEEKLY REGISTER, Baltimore, Jan. 28, 1815  Articles within include: "Lexington, Kentucky" which is descriptive of it; "Naval Establishment", a very lengthy: "Treasury Report" which takes over 4 pages.
Also: "Events of the War" has some nice reports from New Orleans, beginning: "We are yet without definite intelligence from New Orleans. The news will probably arrive this day, that will, at least, relieve our suspense..." and further on are: "Militia General Orders" from New Orleans beginning: "The enemy is in force in the vicinity of the state & his movements indicate a disposition to attack this capital...".
There is a very interesting address headed: "To the Men of Color" signed by: Thomas L. Butler, beginning: "Soldiers--From the shores of Mobile I collected you to arms--I invited you to share in the perils and to divide the glory of your white countrymen...I knew that you could endure hunger and thirst & all the hardships of war...but you surpass my hopes. I have found in you, united to those qualities, that noble enthusiasm which impels to great deeds..." with more. A rare address to freed slaves on their valor in fighting in the War of 1812.
Sixteen pages, 6 by 9 3/4 inches, close trimmed to the Kentucky article otherwise nice condition.