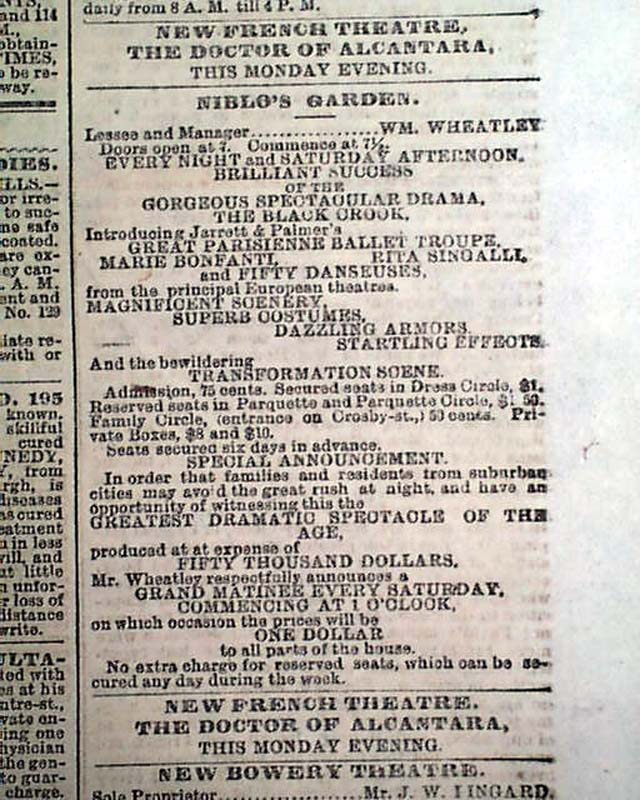 
NEW YORK TIMES, Sept. 17, 1866  Although an inconspicuous listing on page 7, the advertisement for the Broadway production of the "Black Crook" is quite significant. And even more significant is the page 4 review of the production, as the "Black Crook" is honored in theater history as the first modern musical.
As Wikipedia notes: "Its significance is being considered the first piece of musical theater that conforms to the modern notion of a "book musical" The book is by Charles M. Barras, an American playwright. The music is mostly adaptations, but some new songs were composed for the piece. It opened on September 12, 1866 at Niblo's Garden on Broadway, New York City and ran for a record-breaking 474 performances. This production gave America claim to having originated the musical. The Black Crook is considered a prototype of the modern musical in that its popular songs and dances are interspersed throughout a unifying play and performed by the actors."
The advertisement notes in part: "Brilliant Success of the Gorgeous Spectacular Drama, The Black Crook...Magnificent Scenery, Superb Costumes, Dazzling Armors, Startling Effects...And the bewildering Transformation Scene..." with other details.
Of greater significance is the review on page 4, with a lead-in head: "Niblo's Garden", which is both critical & complimentary, for differing reasons. It begins: "The 'Black Crook'...will be given to-night and every night for months to come...No one need go to see the play--it's a very odd mixture of 'Doc Freischutz,' 'Undine,' the 'Naiad Queen,' and several little Teutonic nursery tales: at least, it was before the stern knife of public somnolence cut its very bowels away leaving an inanimate skeleton of legendic absurdity...". But this reviewer goes on to praise the "...delightful ballet which are incidental and ornamental to the 'Black Crook'..." with more (see).
Note the advertisement for the "Winter Garden" theater which begins by mentioning the burning of the Academy of Music. It was at this theater that the "Black Crook" was to have opened but was moved to Niblo's Garden due to the fire.
This newspaper ad & review are just 5 days after the opening performance and only a New York City newspaper would contain this significant content
The complete 8 page newspaper in very nice condition.

The 13th Amendment becomes the law of...