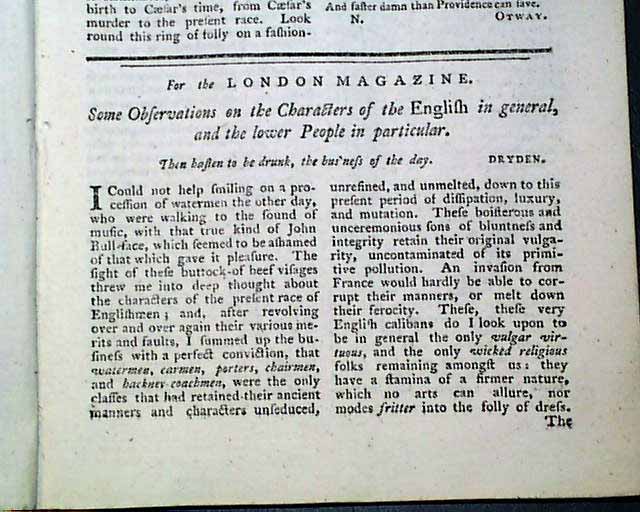 
THE LONDON MAGAZINE, England, June, 1774  Articles include: "Some Observations on the Characters of the English in General, and the Lower People in Particular" "Thoughts on the Reformation" and so much more. Among "Review of New Publications" is: The Chains of Slavery" and; "A Speech Intended to have Been Spoken on the Bill for Altering the Charter of the Colony of Massachusetts Bay".
Included is a nice article: "Account of Fingal's Cave in the Island of Staffa" which is a geological marvel in the smallest island in the Southern Hebrides off Scotland. This is accompanied by a full page plate of Fingal's Cave (see).
The bkpg. has a report headed: "America" noting: "The last accounts from America mention the arrival of Gen. Gage at Boston...in order to take on hi the government of that province. Immediately after the arrival of his excellency, all the principal Bostonian assembled & came to a resolution not to carry on any trade whatever with England...till the late act, which shut up the port of Boston, shall be repealed. Time only can determine the consequences of this critical resolution." And what a prophetic statement that was! It was at Gage's arrival in Boston when the growing troubles between England and the American colonies would come to a head with the Revolutionary War.
Complete in 52 pages, 5 by 8 1/4 inches, two leaves near the back (containing poetry) have portions clipped out, otherwise in very nice condition. The other plate called for is lacking.