Home > Back to Search Results > A "journal" on the siege of Brussels...
Click image to enlarge 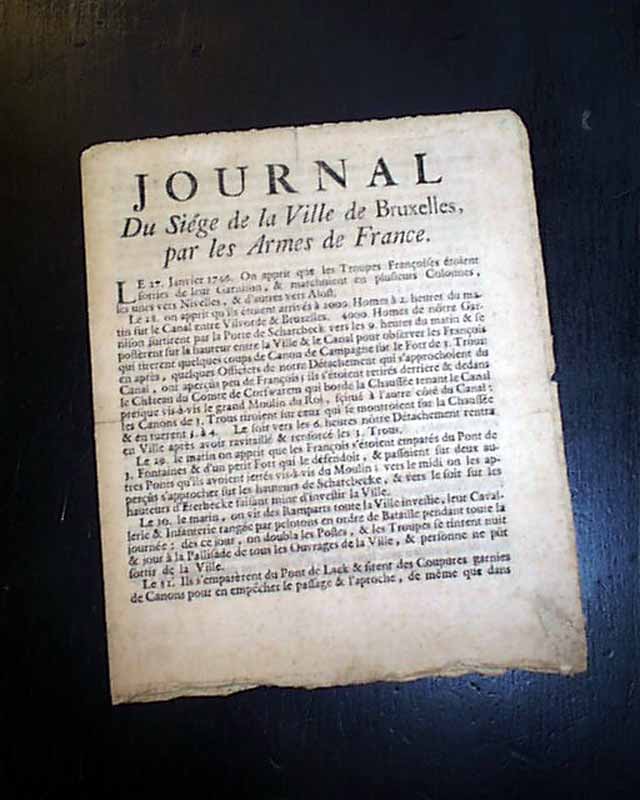 A "journal" on the siege of Brussels...


A four page news sheet rather than a typical newspaper. This rare item is headed: "JOURNAL Du Siege de la Ville de Bruxelles, par Les Armes de France." translating to: "Journal of the Siege of the City of Brussels, by the Arms of France."
The text begins with the date: January 27, 1746. As a bit of history, Belgium ad been under Spanish rules from 1585 until early in the 1700's. It then was under Austrian rule under Maria Theresa. In 1744 the French invaded Belgium, defeating the English at Fontenoy on May 11, 1745, & took possession of Belgium for Louis XV of France. But it was restored to Maria Theresa by the treaty of Aix La Chapelle on Oct. 18, 1748.
Four pages, never bound nor trimmed, archivally rejoined at the spine, 6 1/4 by 7 1/2 inches, nice condition.