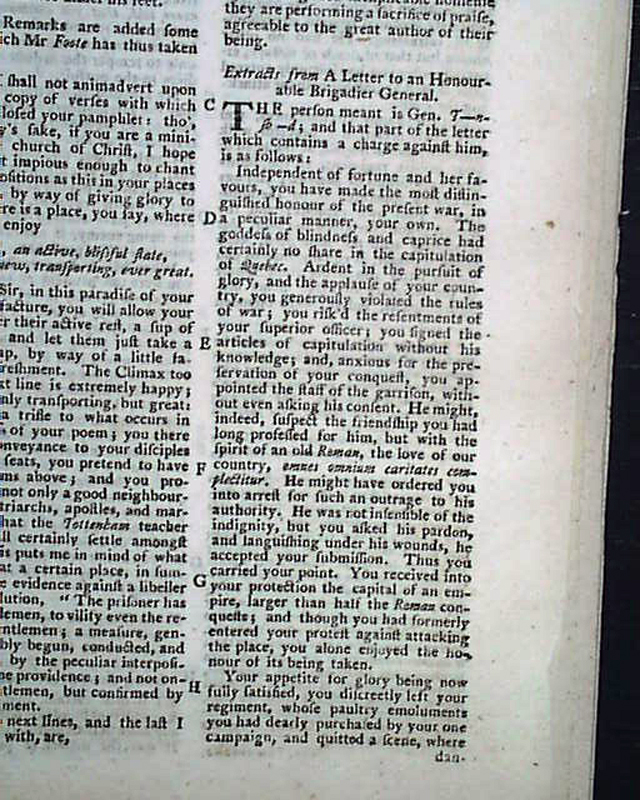 GENTLEMAN'S MAGAZINE, London, November, 1760  Among the articles in this issue are: "Scheme for Widening the Narrow Streets in London" "Charge Against Gen. T--sh--d for his Conduct at Quebec" which takes over 3 pages (see for beginning); "The Anniversary of Queen Elizabeth's Accession" "History of the London Brewery" "Queries Concerning the American Fishery Answered" and more.
Also included is: "Louisiana or Mississippi Dangerous to N. America" which takes most of a column (see).
The only plate called for in this issue is a nice foldout map headed: "A Map of Part of Brandenburg including Berlin and the Country Pillaged by the Russians" which is included. It folds out to 8 1/2 by 10 1/4 inches & has some hand-tinted border markings in yellow, nice condition (see).
Near the back is the "Historical Chronicle" which gives various news reports of the day and includes: "The Ceremonial of the Interment of his late most Excellency Majesty King George the Second of Blessed Memory..." which takes over a page (see for portions). It also includes a section headed: "America" which provides some information on the French & Indian War including mentions of Gen. Amherst, Quebec, New York, Crown Point, and more (see).
Complete in 52 pages, 5 1/2 by 8 1/2 inches, full title/contents page featuring an engraving of St. John's Gate, nice condition.