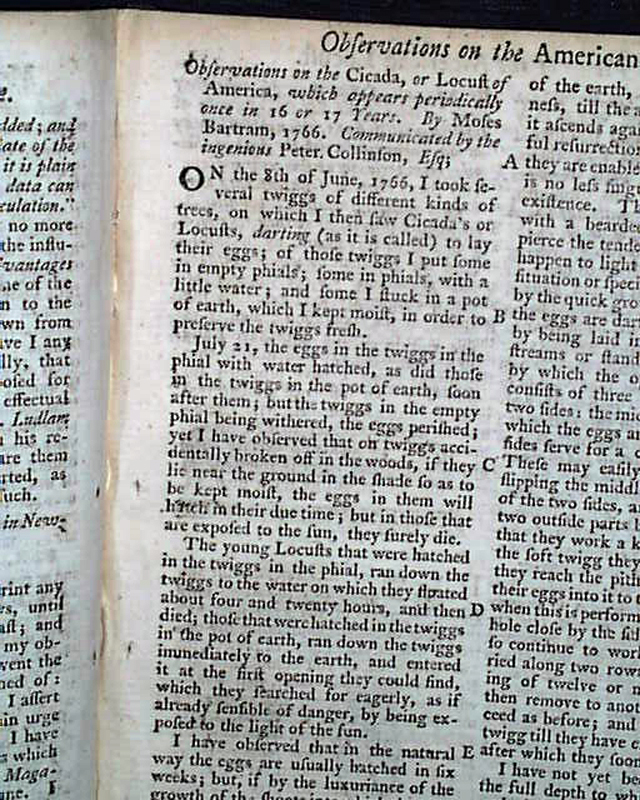 Item # 650311 THE GENTLEMAN'S MAGAZINE, London, August, 1767  Among the articles within are: "Observations on the American Locust" which takes nearly two pages and includes three illustrations of them (see); "Journey to the Written Mountains" includes a foldout plate showing the inscriptions there, near the Red Sea (see), measuring 8 by 10 1/2 inches; "Acts for the Preservation of the Highways" "The Present State of London Bridge" and more.
There is a full page sheet of music: "Collin's Invitation to Phoebe, set to music by Mr. Potter" (see).
There is a full page of: "American News" which is mostly taken up with the address of the Massachusetts House of Representatives to Governor Bernard, which focuses on the trouble brewing there, and including: "...there is the deepest concern among the people of this province that after they have shewn every possible mark of loyalty, it has yet been represented to his Majesty that a degree of ill temper remains..." with more (see). There is also a report from South Carolina concerning trouble with Indians (see).
Present is the foldout plate of the "...famous inscriptions on the Written Mountains near the Red Sea...". The other plate called for is actually in the September issue as the related article is found there.
Complete in 48 pages with full title/contents page and an engraving of St. John's Gate. Measures 5 1/4 by 8 inches and is in very nice, clean condition.