Home > Back to Search Results > Jewish Holocaust begins in 1933....
Click image to enlarge 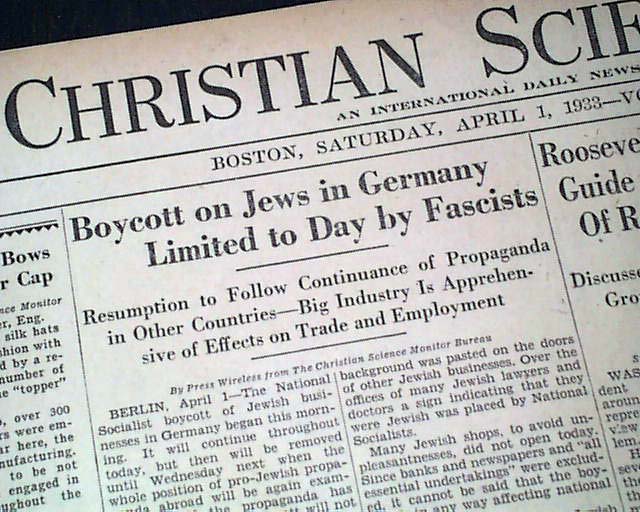 The top of the front page has a two column heading: "Boycott on Jews in Germany Limited to Day by Fascists" with subheads. (see) This was the first major German movement against the Jews which would only grow more severe and result in the Holocaust. A historic issue here.
Other news, sports and advertisements of the day. Complete with all 12 pages, minor spine wear, nice condition.

wikipedia notes: On April 1, 1933, the Nazis carried out the first nationwide, planned action against Jews: a boycott targeting Jewish businesses and professionals. The boycott was both a reprisal and an act of revenge prompted by Greuelpropaganda (atrocity stories) that German and foreign Jews, assisted by foreign journalists, were allegedly circulating in the international press to damage Nazi Germany's reputation.

On the day of the boycott, the SA stood menacingly in front of Jewish-owned department stores and retail establishments, and the offices of professionals such as doctors and lawyers. The Star of David was painted in yellow and black across thousands of doors and windows, with accompanying antisemitic slogans. Signs were posted saying "Don't Buy from Jews" and "The Jews Are Our Misfortune." Throughout Germany, acts of violence against individual Jews and Jewish property occurred; the police intervened only rarely.