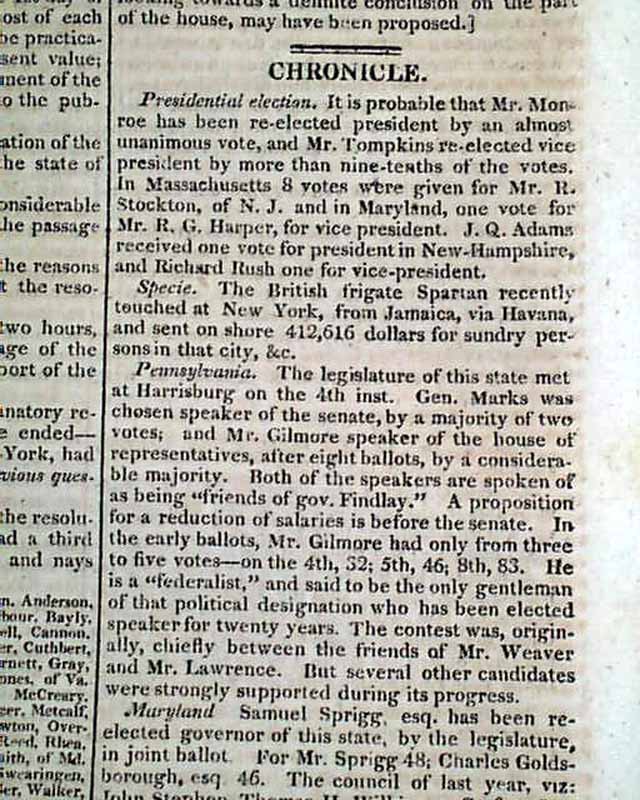 
NILES' WEEKLY REGISTER, Baltimore,  Dec. 16, 1820  The back page has a report with a small head: "Presidential Election" which begins: "It is probable that Mr. Monroe has been re-elected president by an almost unanimous vote & Mr.Tompkins re-elected  vice president..." with a bit more.
This issue comes with a "Supplement" which includes a rare mention of Daniel Boone, the short report reading in part:
"(Died)...in Shelby county, Ken. George Boone, who was the last of the old stock of the famous Boone family--which has been as remarkable for its longevity as for its patriotism & adventurous spirit. Col. Daniel Boone died at the age of 88, Samuel at that of 88..." with just a bit more (see photos).
Another brief report in the Supplement reads: "The Constitution frigate, 'Old Ironsides', has been thoroughly repaired and, though 22 years old, is as sound a vessel as belongs to the service. She is to be fitted for sea immediately. Her crew will be easily made up."
Complete in 16 pages, 6 1/2 by 10 inches, scattered foxing, generally nice.