Home > Back to Search Results > Need to create a naval depot near the nation's capital...
Click image to enlarge 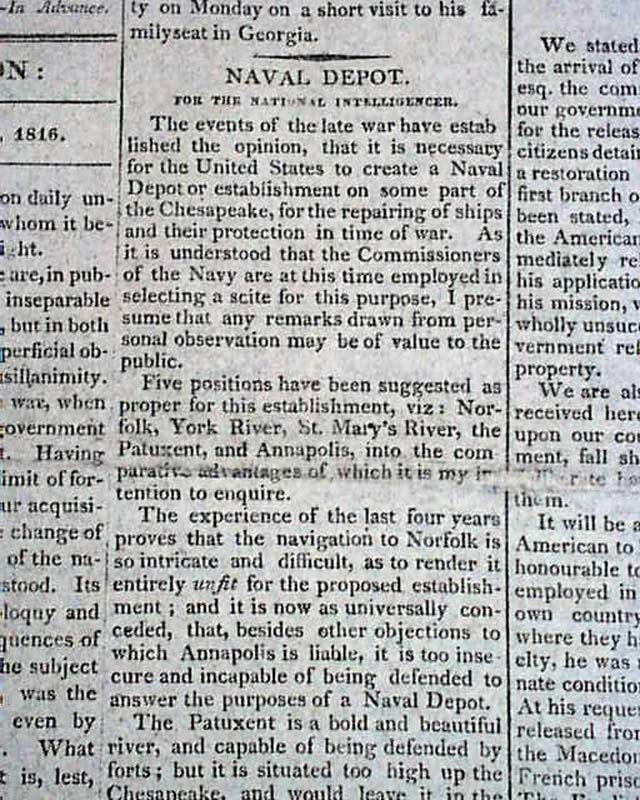 Need to create a naval depot near the nation's capital...


NATIONAL INTELLIGENCER, Washington, July 13, 1816  The ftpg. has most of a column headed: "NAVAL DEPOT" which begins: "The events of the late  war have established the opinion that it is necessary for the United States to create a Naval Depot or establishment on some part o the Chesapeake for the repairing of ships and their protection in time of war..." with much more including: "...Five positions have been suggested as proper for this establishment, viz: Norfolk, York River, St. Mary's River, the Patuxent, and Annapolis, into the comparative advantage of which it is my intent to inquire..." which the balance of the articles does.
The bkpg. has letters exchanged between Th. Jefferson and John Adams, signed in type by each.
Four pages, rubbing at folds in the top quadrant causes a small hole & some type loss to unrelated articles, an old repair to the back page, otherwise good condition.