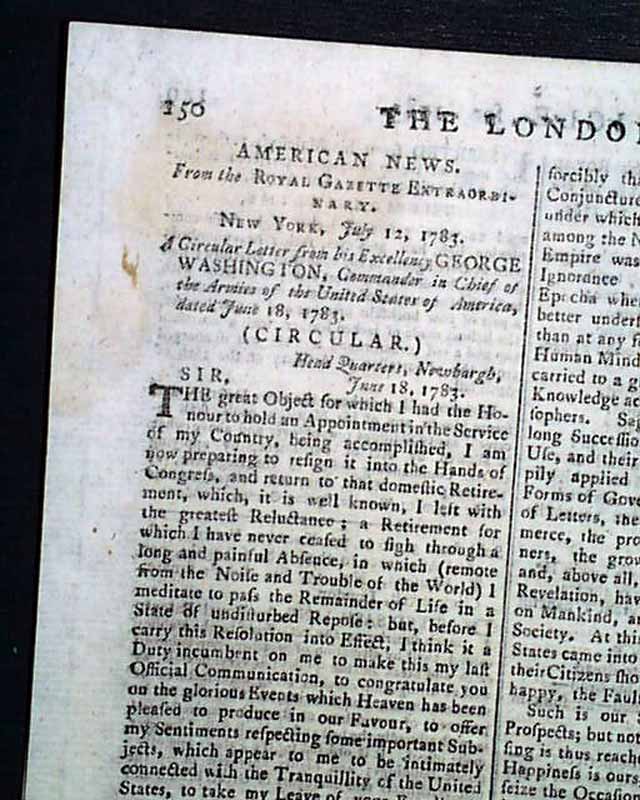 Under the heading: "American News" on page 6 and concluding on page 8 is the complete printing of "A Circular Letter from his Excellency GEORGE WASHINGTON, Commander in Chief of the Armies of the United States of America, dated June 18, 1783." (The actual document is dated June 8th, however the British reports note the 18th.)
The letter is datelined from his headquarters at Newburgh, New  York, and begins: "The great object for which I had the honour to hold an appointment in the service of my country being accomplished, I am now preparing to resign it into the hands of Congress and return to that domestic retirement which, it is well known, I left with the greatest reluctance...". It closes with a fervent prayer "...I now make it my earnest prayer, that God would have you, and the State over which you preside, in his holy protection; that he would incline that hearts of the citizens to cultivate a spirit of subordination and obedience to Government; to entertain a brotherly affection and love for one another, for their fellow-citizens of the United States at large, and particularly for their brethren who have served in the field; and finally, that he would most graciously be pleased to dispose us all to do justice, to love mercy, and to demean ourselves with that charity, humility, and pacific temper of mind, which were the characteristics of the Divine Author of our blessed religion; without an humble imitation of whose example, in these things, we can never hope to be a happy nation..." Signed in type: G. WASHINGTON.
Complete in eight pages, 8 1/2 by 11 1/4 inches, full red tax stamp, very nice condition.