Home > Back to Search Results > Site for the original Yankee Stadium found?...
Click image to enlarge 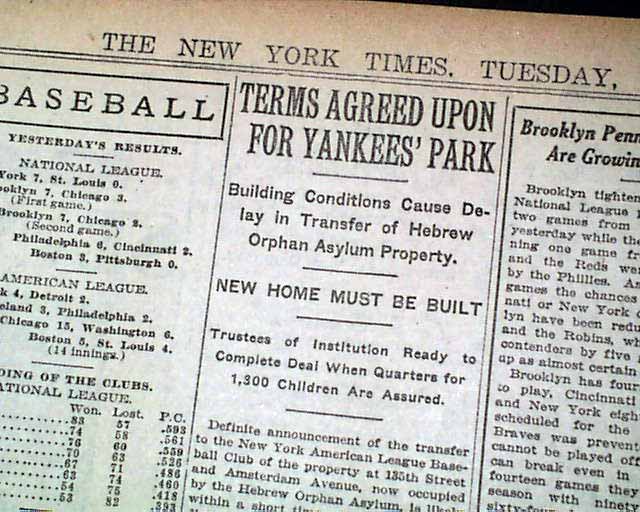 * Old Yankee Stadium site found ?
* "The House that Ruth Built" nears
* Best title to be had ?

As for Yankee history, this issue has a gem report on what was to have become the site for the original Yankee Stadium. The top of page 13 has a column headed: "Terms Agreed Upon For Yankees' Park" "Building Conditions Cause Delay in Transfer of Hebrew Orphan Asylum Property" "New Home Must Be Built" "Trustees of Institution Ready to Complete Deal When Quarters for 1,300 Children Are Assured"
The article begins: "Definite announcement of the transfer of the New York American League Baseball Club of the property at 135th St. and Amsterdam Avenue, now occupied by the Hebrew Orphan Asylum, is likely within a short time..." with much more (see).
Even a New York Times report dated January 30, 1921 gave further confirmation of the home for the New Yankee Stadium. But it would never come to be. Wikipedia notes: "...Huston and Ruppert explored many areas for Yankee Stadium. Of the other sites being considered, the Hebrew Orphan Asylum, at Amsterdam Avenue between 136th and 138th streets in Manhattan, nearly became reality..".
Complete in 32 pages, light toning at the margins, a little irregular along the spine, generally good.