Home > Back to Search Results > Creating a government in Colombia... Indian lands and laws...
Click image to enlarge 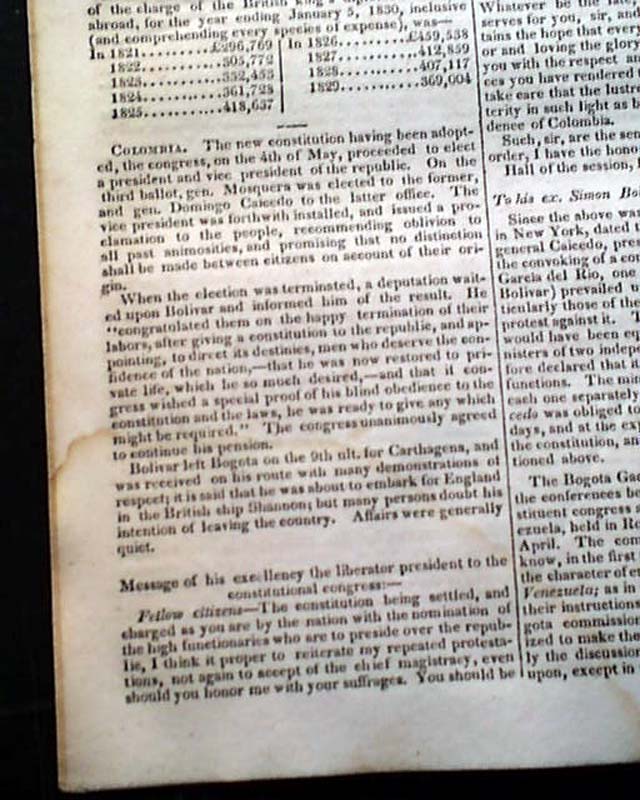 Creating a government in Colombia... Indian lands and laws...


NILES' WEEKLY REGISTER, Baltimore, June 26, 1830  Inside has a report concerning the creation of a government in "Colombia" noting: "The new constitution having been adopted...proceeded to elect a president and vice president of the republic...a deputation waited upon Bolivar & informed him of the result He congratulated them on the happy termination of their labors...". This is followed by the: "Message of his Excellency the Liberator President to the Constitutional Congress" signed in type: Simon Bolivar, then the "Answer of Congress" to Bolivar.
Also inside: "The Indian Lands" and then: "Indians In Georgia" being a "Proclamation" extending the laws  of Georgia to the Cherokee Indians as well, taking over a full column.
Sixteen pages, 6 by 9 1/4 inches, bit of damp staining, nice condition.