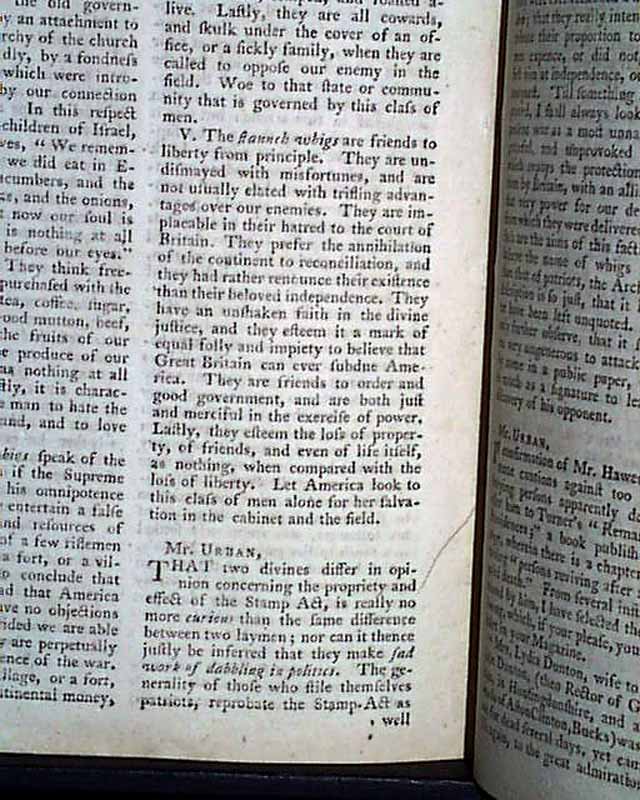 THE GENTLEMAN'S MAGAZINE, London, Nov., 1777  The first article is: "Debate in the House of Lords...Relative to the American War" taking over 4 pages & continued from a previous issue (see for portions). Further on is an interesting article: "Political Character of the Americans" which begins: "The people of America, with respect to their political characters, may be divided into the five following classes: 1. Rank tories, 2. Moderate men, 3. timid whigs, 4. Furious whigs, 5. Staunch whigs." The article goes on to define in detail each.
Near the back  is over a full page headed: "American News" which includes: "...The letters from Gen. Burgoyne gave no very favourable idea of the situation of the army under his command..." and what follows are some details of the first battle of Saratoga of Sept. 19, 1777 in which Burgoyne is defeated. A bit further on is discussion in Parliament concerning the American situation.
Included is the foldout map being a "Plan of the Navigable Canal from Langley Bridge to the River Trent..." (see).
Complete in 48 pages, 5 by 8 inches, full title/contents page with an engraving of St. John's Gate, great condition.