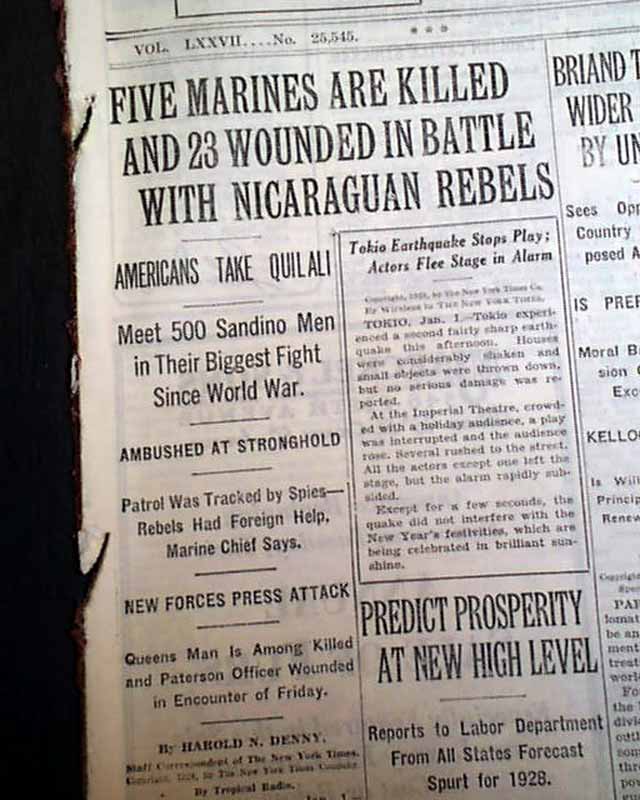 The top of the front page has a two column headline: "FIVE MARINES ARE KILLED AND 23 WOUNDED IN BATTLE WITH NICARAGUAN REBELS" with subheads. (see) First report coverage on the Second Battle of Las Cruces during the American occupation of Nicaragua.
Other news, sports and advertisements of the day. Complete in 64 pages, this is the rare rag edition that was produced on very high quality newsprint, with a high percentage of cotton & linen content, allowing the issues to remain very white & sturdy into the present. Given the subscription cost, libraries & institutions rather than individuals were the primary subscribers of these high-quality editions. Irregular along the spine, nice condition.

wikipedia notes: The Second Battle of Las Cruces, or the New Year's Day Battle, was a major engagement during the American occupation of Nicaragua. It was fought on 1 January 1928, during an expedition to destroy a Sandinista fortress. A column of United States Marines and Nicaraguan National Guardsmen were attacked by a superior force of rebels entrenched on Las Cruises Hill and, after a long battle, the Americans and Nicaraguans routed the Sandinistas and captured their positions.