Home > Back to Search Results > Great travelogue of a journey west...
Click image to enlarge 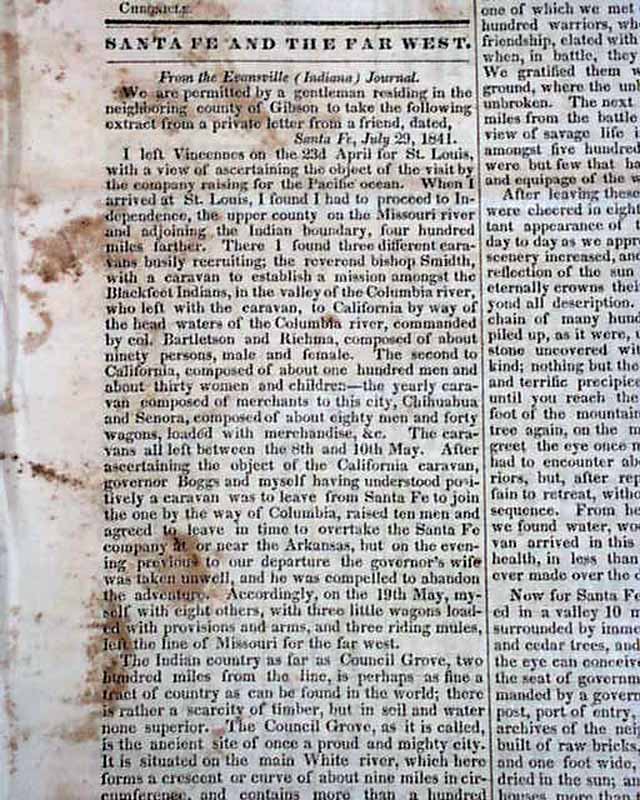 Great travelogue of a journey west...


NILES' NATIONAL REGISTER, Baltimore, Dec. 4, 1841  Most of the ftpg. is a terrific travelogue of the West, headed: "Santa Fe And the Far West". It is a letter datelines at Santa Fe, July 29, 1841 and is very descriptive of the travel from Vincennes, Indiana, to St. Louis, then further west into the Indian country, and then Santa Fe. Nice detail on the latter. It ends with: "I start in two or three days to California...We expect the governor will allow us to settle & concede to us certain lands."
Elsewhere: "A Sketch of the Laws of Maryland, in Relation to the Colored Population of the State" with the text taking 3 pages.
The bottom of the bkpg. has a brief item: "The Amistad Africans" noting: "Thirty-five, all that survive of the Mendis brought to our shore in the Amistad, sailed from N. York...for their native country via Sierra Leone...". This famous slave ship and the revolt of its occupants was not only a notable legal case at the time, but in 1997 was made into feature length movie by Stephen Spielberg.
Sixteen pages, various foxing, 8 1/2 by 12 inches, nice condition.