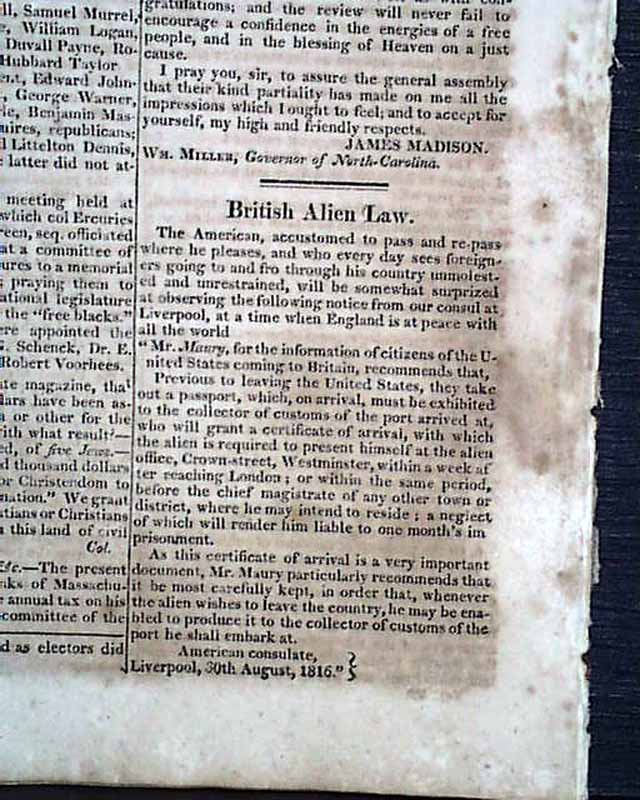 
NILES' WEEKLY REGISTER, Baltimore, December 14, 1816  One of the more notable items in this issue is the back page item with a small heading: "The Jews" with the text including:
"...about $500,000 have been assessed on the public in one form or other for the last five yeas & expended---with what result? The conversion, real or supposed, of five Jews. This is at the rate of $100,000 per Jew..." with just a bit more, and ending with: "...what is it to us in this land of civil and religious liberty?"
Under "Congress", which has the details regarding Indiana Statehood:  "... the resolution for admitting the state of Indiana into the union... was read the third time, and passed unanimously, as follows...", followed by the text of the resolution.
Among other reports in this issue are a lengthy governor's speech to the New Hampshire legislature; a lengthy governor's speech to the Pennsylvania legislature; a letter signed in type by: James Madison; and an article: "African Colonizations".
Complete in 16 pages, 6 1/4 by 9 3/4 inches, even toning, otherwise nice.