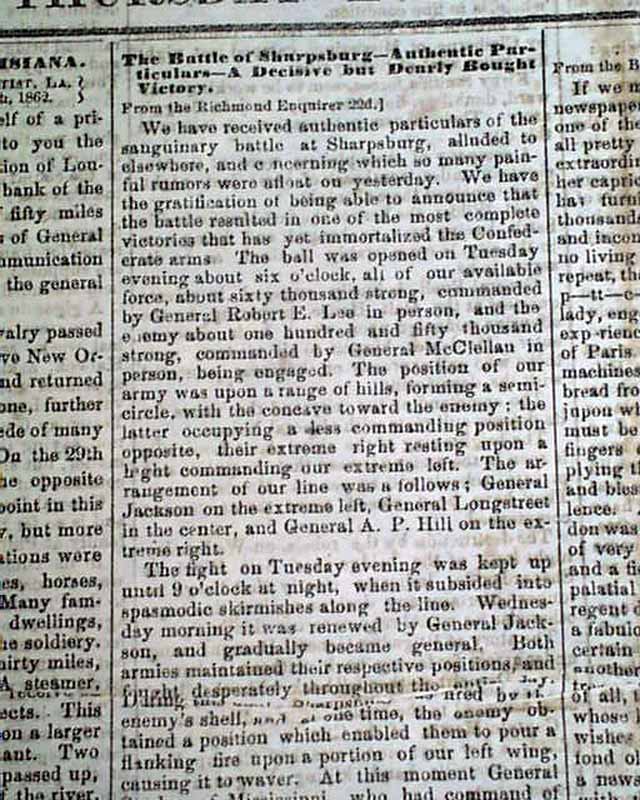 If the title and city of publication seem to be in conflict, they are not. This newspaper had a fascinating history during the Civil War. Memphis was a Confederate stronghold up through the Battle of Memphis on June 6, 1862, at which time the Yankees moved in and it became a Yankee city. Being a strong voice for the Confederacy, the "Memphis Appeal" newspaper would not continue under Yankee control. As Wikipedia notes: "...On June 6, 1862, the presses and plates were loaded into a boxcar and moved to Grenada, Mississippi, where it published for some time. The Appeal later journeyed to Jackson, Mississippi, Meridian, Mississippi, Atlanta, Georgia, and finally Montgomery, Alabama, where the plates were destroyed on April 6, 1865, only days before the Confederate surrender, halting publication of what had been one of the major papers serving the Southern cause." So this one newspaper published in six different Confederate cities during the Civil War.
The front page has a lengthy article headed: "Situation In East Louisiana" "The Battle of Sharpsburg--Authentic Particulars--A Decisive and Dearly Bought Victory" "The Battle of Wednesday" "Heroic Incident" "Negro Immigration" & more.
The bkpg. has more war content including: "The Confederate Seal" "Latest From Kentucky" "Latest Washington Gossip" "The Fight at Pocahontas" and more.
Nice war-related content in a Confederate "Memphis" newspaper printed in Grenada, Mississippi.
Single sheet, damp staining to the right edge, some foxing, generally nice condition.