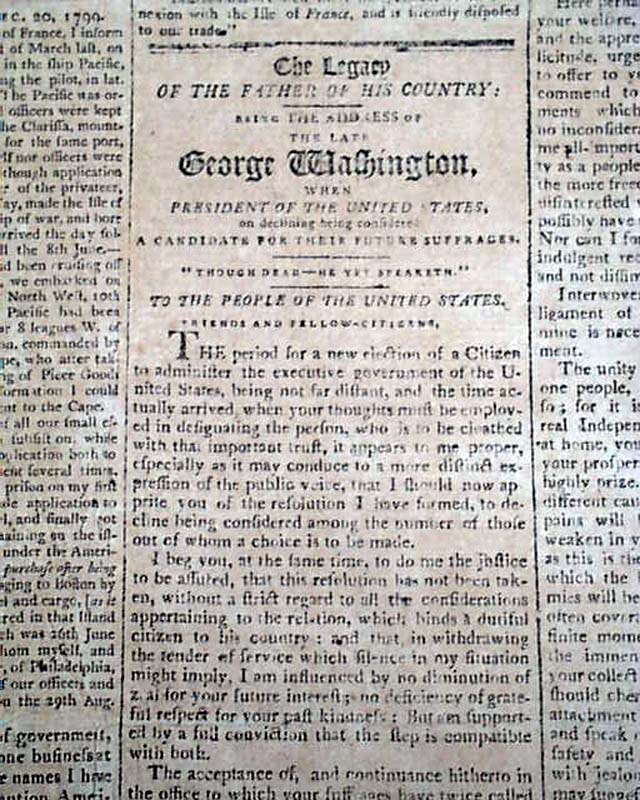 
COLUMBIAN CENTINEL, Boston, Dec. 25 1799  Reports on the death of Washington remain among the more desired and scarce newspapers of the post-Revolutionary War era. Rarely have we been able to offer a first report. This is one. And with an early date, as some newspapers did not learn of Washington's death until close to, or in, January of 1800.
Page 3 has a report taking about two-thirds of a column with wide mourning rules above & below the text, headed: "WASHINGTON IS NO MORE ! " with the report datelined Dec. 15 & beginning: "It is with extreme pain I inform you that Lieut. General GEORGE WASHINGTON is no more! I hear the complaint was the cramp; that he was sick twenty-four hours and died last night at 12 o'clock. I have just returned from the house of the Physician General of the United States, Dr. Craik, who has not yet returned from Mount Vernon, which prevents my being more particular..." with more (see). What follows are some editorial reports on the life of George Washington.
Much of the front page & most of page 2 are taken up with: "The Legacy of the Father of His Country, Being the Address of the Late GEORGE WASHINGTON..." being his Farewell Address from 1796, signed by him in script type: G. Washington.
Complete in 4 pages black mourning rules surround each of the pages, water staining with wear and chipping at the margins. Archival strengthening at the spine, plus other archival mends to pages 2 & 3