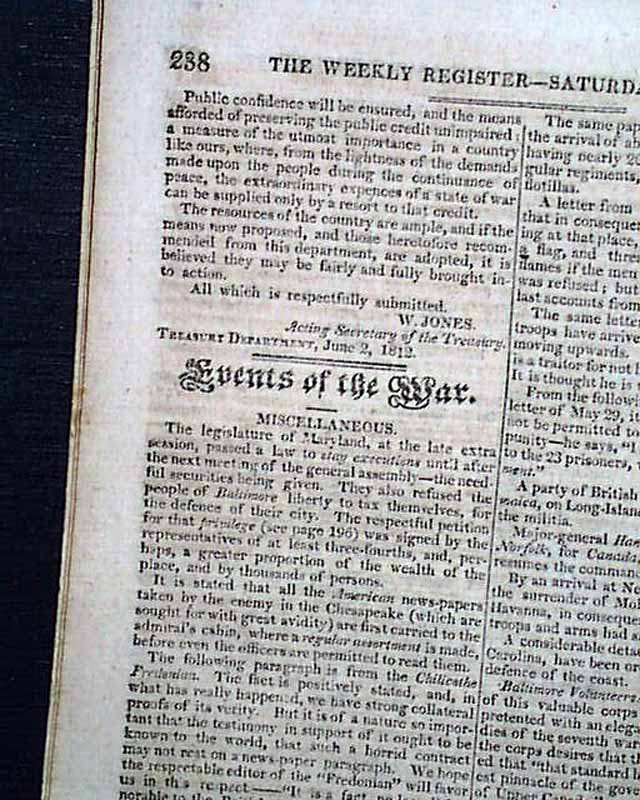 
THE WEEKLY REGISTER, Baltimore, June 12, 1813  The prime content in this issue is the report which has a small head: "The Chesapeake Frigate" which reports on the historic naval battle between the Chesapeake & the Shannon.
As noted near the beginning of the report: "...the Chesapeake frigate left Boston harbor...with the expectation of meeting the Shannon. We anticipated a glorious result, but alas! by some uncommon incident not yet explained, the event has terminated in the loss of that ship..." with more.
This is then followed by a letter signed by: W. Bainbridge which begins: "It has become my painful duty as commanding officer on this station to convey to you the unpleasant intelligence of the capture of the frigate Chesapeake by the British frigate Shannon. The particulars...as follow:..." and what follows is his report on the battle. This text carries over to the next page.
There is much more reporting on the War of 1812 in this issue under the heading: "Events Of The War" taking several pages and including many battle reports signed in type by notables from the war including H. Dearborn, Isaac Chauncey, Jacob Brown, and Morgan Lewis. There is also a nice & detailed report on the: "Siege of Fort Meigs".
Complete in 16 pages, 6 by 9 1/2 inches.