Home > Back to Search Results > The Chesapeake & the Shannon... Battle of Sackett's Harbor...
Click image to enlarge 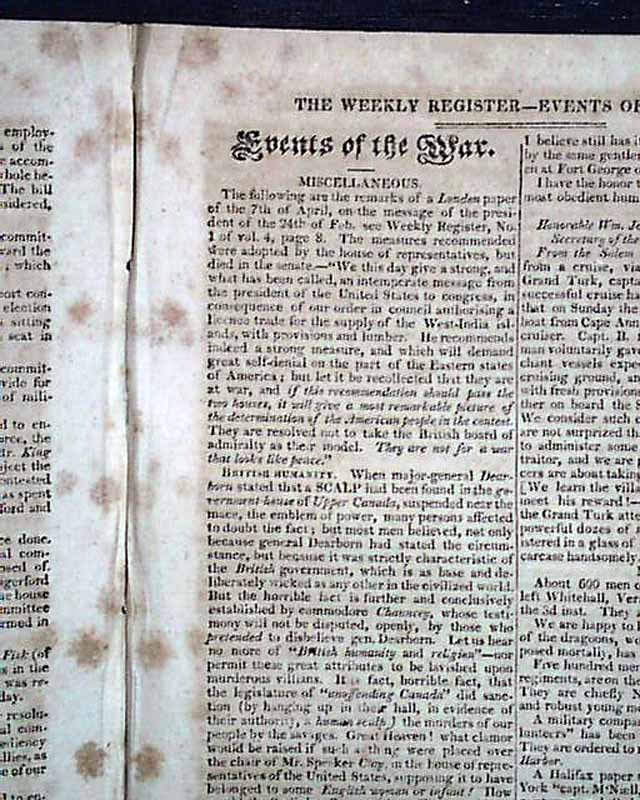 The Chesapeake & the Shannon... Battle of Sackett's Harbor...


THE WEEKLY REGISTER, Baltimore, June 19, 1813  Near the back is a significant report on one of the more notable naval battles of the War of 1812, the Chesapeake versus the Shannon.
The report has a small head: "The Chesapeake Frigate" with the article noting: "...informed that the day before they had parted with the Shannon, with the Chesapeake her prize, steering fro Halifax, 'which she had taken after an engagement of two hours and give her a d___ drubbing.' " And also: "...we learn that they say two large ships going in & shortly after heard a salute fired. They had not been informed of the battle. That the Chesapeake is captured we cannot doubt but the circumstances attending the affray are enveloped in mystery. Decatur's squadron remains at New London..." with more.
Following this is; 'Loss of the Growler and Eagle" which carries over to the back page. Other war related content in this issue as well under the heading: "Events of the War", including: "American Prizes" , a letter signed in type by: H. Dearborn, a letter from Fort George, a lengthy & detailed letter from General Jacob Brown with much on the battle at Sackett's Harbor; a letter signed by Isaac Chauncey, and more.
Complete in 16 pages, 6 by 9 1/2 inches, very lite scattered foxing, otherwise in very nice condition.