Home > Back to Search Results > Enterprize vs. the Boxer... Barbarities of the enemy...
Click image to enlarge 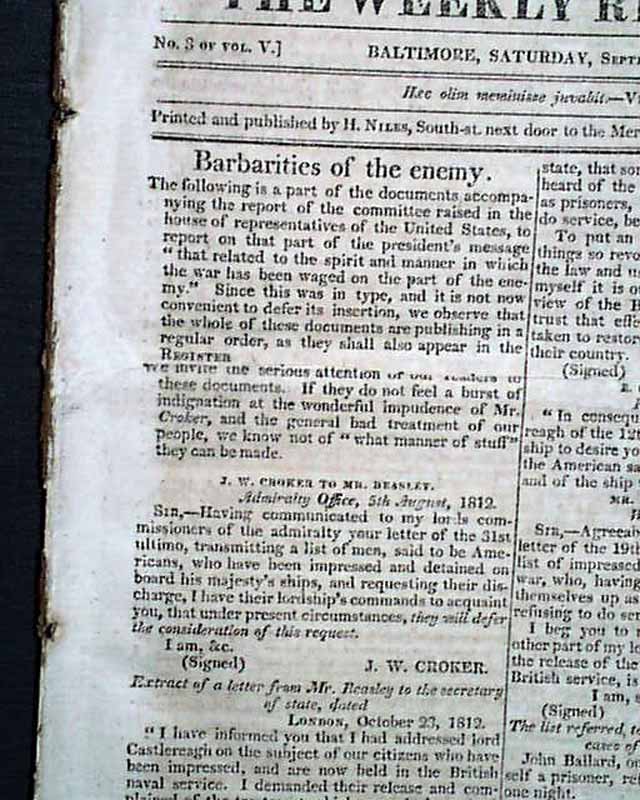 Enterprize vs. the Boxer... Barbarities of the enemy...


THE WEEKLY REGISTER, Baltimore, Sept. 18, 1813  The front page begins with: "Barbarities of the Enemy" which concerns: "...the spirit and manner in which the war has been waged on the part of the enemy...and the general bad treatment of our people..." with details taking the entire ftpg. as well as all of pgs. 2, 3 & half of pg. 4.
"Events of the War" reports on the latest news of the on-going War of 1812 and takes 4 1/2 pages with subheads including: "Northern Army & Ontario Fleet" "Military"; two reports from Chilicothe; "The Creeks" "Splendid Naval Victory" concerns the Enterprize vs. the Boxer and includes a letter signed: Isaac Hull.
Other reports include: "American Prizes" "Naturalization of Citizens" "Martial Law Case" and more.
Complete in 16 pages, 6 1/4 by 9 1/2 inches, very good condition.