Home > Back to Search Results > Battle of Fort Stephenson with a diagram...
Click image to enlarge 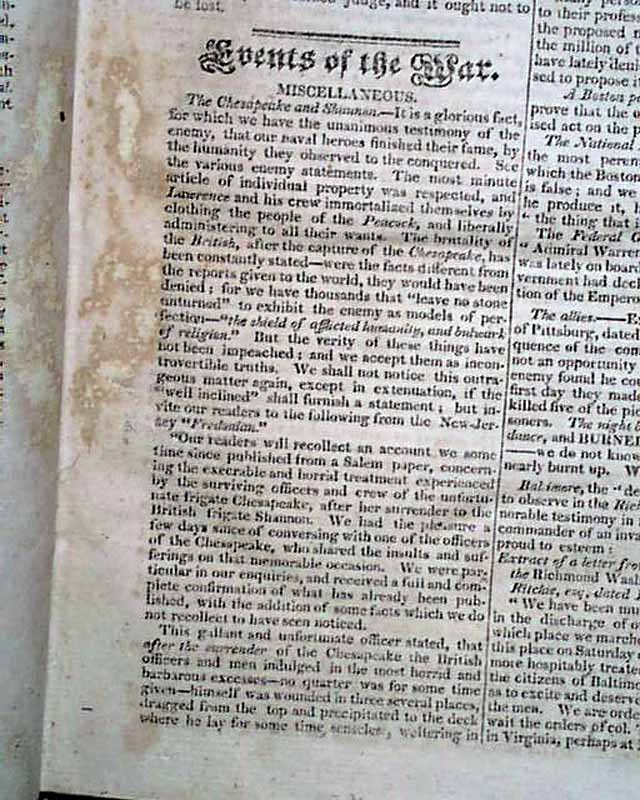 Battle of Fort Stephenson with a diagram...


THE WEEKLY REGISTER, Baltimore, Sept. 4, 1813  Inside has: "Events of the War" taking over 11 pages to provide the latest news from the War of 1812.
It begins with: "The Chesapeake & Shannon - It is a glorious fact, for which we have the unanimous testimony of the enemy, that our naval heroes finished of their fame by the humanity they observed to the conquered..." with much more. One of the reports has much under: "Attack On Sandusky" which is a fine report on the Battle of Fort Stephenson and which also includes a crude diagram of the vicinity--quite rare to find such diagrams in newspapers of this early date.
Other reports & subheads include: "Major Gen. Dearborn" "Military"; a letter from Gen. Bond to the Secretary of War; "General Orders" from Camp Meigs; "British Officials"; a report on the battle between the American ship Decatur & the British schooner Dominica, with much detail; "American Prizes" and much more.
Complete in 16 pages, 6 1/4 by 9 1/2 inches, lite scattered foxing, otherwise in very good condition.