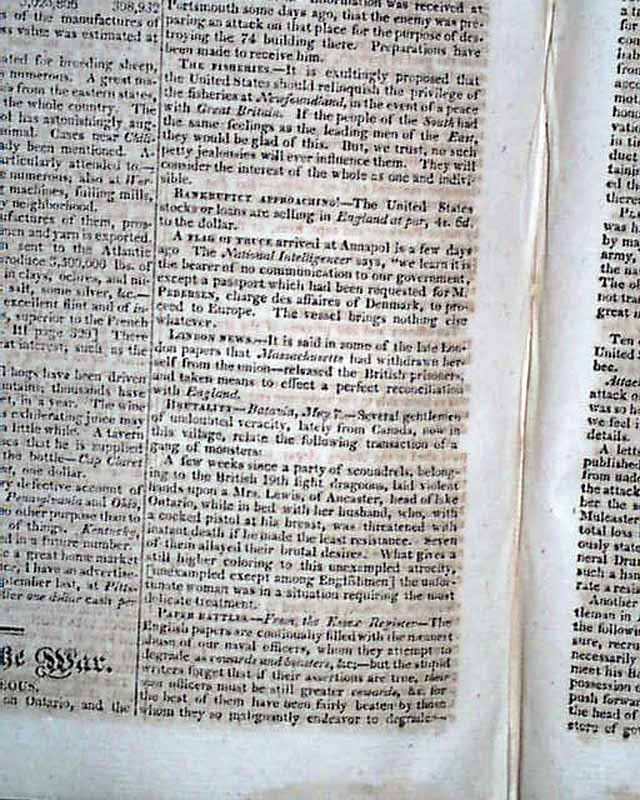 
NILES' WEEKLY REGISTER, Baltimore, May 28, 1814  Inside has over 3 1/2 pages under the heading: "Events of the War" with much reporting on the on-going War of 1812 Among various subheads are: "Paper Battles" "Military" "A Flag of Truce"; a letter signed in type by General John Floyd with his brigade orders beginning: "In consequence of the menacing appearance of the enemy who have been for the last 8 days hovering on the coast...at the town of Fernandina in East Florida...directs Col. Scott...to order out...120 men..." and more (see). Also a half column: "Official Dispatch from General Jackson to his Excellency Governor Blount" dated: "camp at the junction of the Coosee and Talapoosee" signed in type: And. Jackson; Other military-themed letters from Jacob Brown, Isaac Chauncey & others; a report on the naval events of Lake Champlain; a letter from L. Warrington of the ship Peacock dated at Savannah; and more. Also most of a page taken up with: "American Prizes".
Sixteen pages, 6 1/4 by 9 3/4 inches, in generally very good condition.