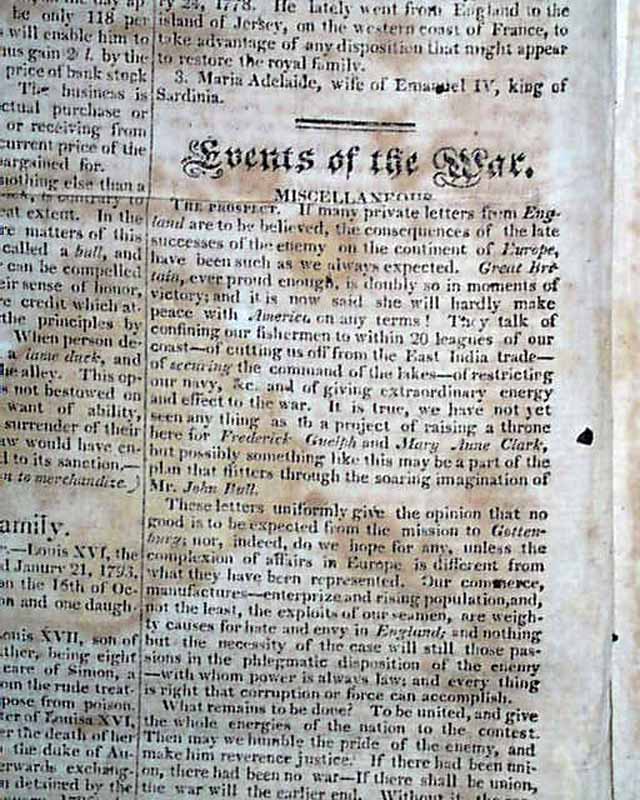 
NILES' WEEKLY REGISTER, Baltimore, June 4, 1814  Inside has over 6 pages taken up with: "Events of the War" reporting on the on-going War of 1812. Among the reports are a letter from Col. Hawkins concerning the Creek Indian War, plus a lengthier letter signed in type: Andrew Jackson, with more reporting on the Creek War. Another document is headed: "Traitors" beginning: "It is contended by many in the United States that a man cannot change his allegiance & that a national born British subject...must be regarded as a traitor if found in arms fighting for his adopted country...". Another report notes: "General Jackson of the Tennessee militia, the finisher of the wars of the Creeks, has been appointed by the president a major general in the army of the United States...". Also a letter signed by: T. MacDonough concerning the enemy attacking at Burlington; a report headed: "British Official Account of their Late Attack on Oswego" which takes most of a page.
Another page has "A Proclamation" by the governor of Louisiana concerning: "...a number of individuals...are engaged in raising troops & preparing the means for an hostile incursion into the Spanish province of Texas with a view of aiding in the overthrow of the government of Spain..." with more. Nice item on early Texas history.
Sixteen pages, 6 by 9 1/2 inches, scattered foxing, otherwise in good condition.