Home > Back to Search Results > Description of Louisiana...
Click image to enlarge 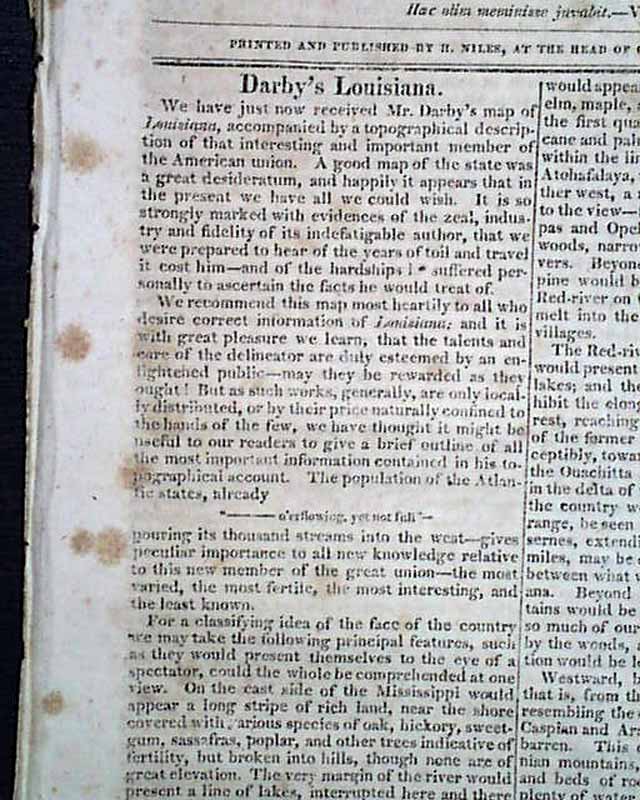 
NILES' WEEKLY REGISTER, Baltimore, July 27, 1816  Perhaps the best content in this issue is the nice front page article titled: "Darby's Louisiana" which carries over to take all of pg. 2 and most of pg. 3. This is a very early & descriptive article on this new land gained through the Louisiana Purchase less than 13 years prior. Included are two charts, one of the population by parish, and the other a "Table of Profits Resulting from the Employment of 50 workmen on a farm in Louisiana" (see photos).
Among the other reports in this issue are an item noting those still living who signed the Declaration of Independence (see photos) and a report of an Indian assault in Augusta, Georgia.
Sixteen pages, 6 1/4 by 9 1/2 inches, lite scattered foxing, otherwise in very good condition.

This newspaper began in 1811 and was a prime source for national political news of the first half of the 19th century. As noted in Wikipedia, it: "...(was) one of the most widely-circulated magazines in the United States...Devoted primarily to politics...considered an important source for the history of the period."