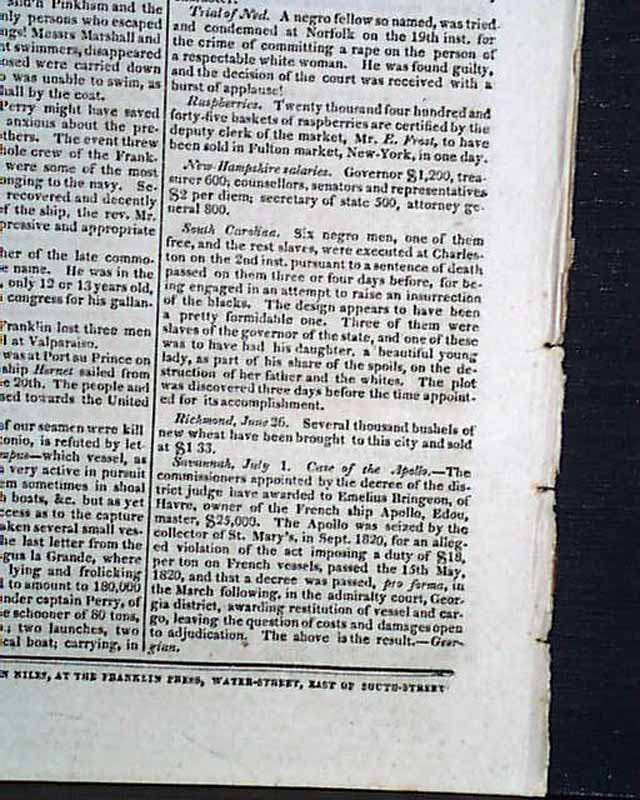 
NILES' WEEKLY REGISTER, Baltimore, July 13, 1822  The back page has a report of the Denmark Vesey slave revolt, noting that six slaves were executed in Charleston.
Denmark Vesey was a former slave who purchased his freedom and then planned what would have been one of the largest slave rebellions in the United States. Word of the plans were leaked and authorities at Charleston arrested the plot's leaders before the uprising could begin. During the Civil War Frederick Douglass used Vesey's name as a battle cry to rally African-American regiments.
The report has a small head: "South Carolina" and reads: "Six negro men, one of them free, and the rest slaves, were executed at Charleston on the 2nd inst. pursuant to a sentence of death passed on them three or four days before, for being engaged in an attempt to raise an insurrection of the blacks. The design appears to have been a pretty formidable one. Three of them were slaves of the governor of the state, & one of these was to have had his daughter, a beautiful young lady, as part of his share of the spoils, on the destruction of her father and the whites. The plot was discovered three days before the time appointed for its accomplishment."
Complete in sixteen pages, 6 1/4 by 9 3/4 inches, very nice condition.