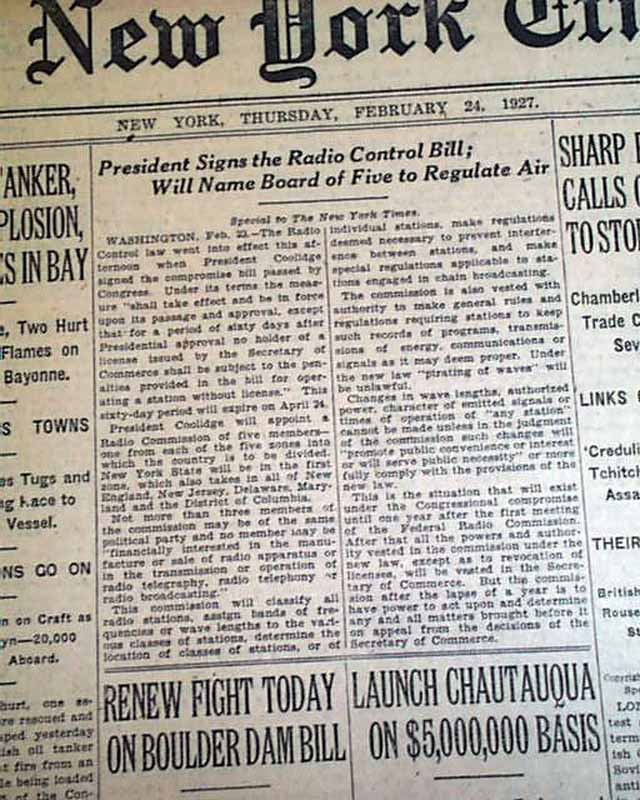 The top of the front page has a two column heading: "President Signs the Radio Control Bill; Will Name Board of Five to Regulate Air" (see)
Other news, sports and advertisements of the day. Complete in 48 pages, light toning at the margins, minor spine wear, generally nice.

Historic bill concerning radio which is still in effect today as the FCC.

wikipedia notes: Prior to 1927, radio was regulated by the United States Department of Commerce, and Commerce Secretary Herbert Hoover played a strong role in shaping radio. His powers were limited, however; in particular, he was not allowed to deny broadcasting licenses to anyone who wanted one. The result was that many people perceived the airwaves to suffer from "chaos," with too many stations trying to be heard on too few frequencies. (Initially only two frequencies were available for broadcasting with one of these being reserved for "Crop reports and weather forecasts.") After several failed attempts to rectify this situation, Congress finally passed the Radio Act of 1927 (signed into law February 23, 1927), which transferred most of the responsibility for radio to a newly created Federal Radio Commission. (Some technical duties remained the responsibility of the Radio Division of the Department of Commerce.)