Home > Back to Search Results > New Orleans from the earliest days of Butler's occupation...
Click image to enlarge 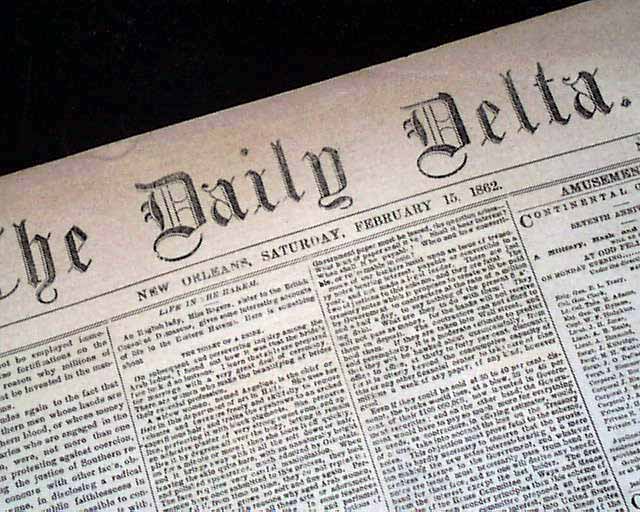 New Orleans from the earliest days of Butler's occupation...

Among the front page item are: "The Federal Raid Up the Tennessee River--Gen. Johnston's Order Disregarded" "What the Morning Journals Say" "Fort Donelson" "The 'Sinews of The War' -- Troubles of the Federal Treasury". There are also 14 ftpg. ads headed: "Confederate States Marshal's Sale"
Page 2 has some graphically nice war heads under an engraving of a cannon: "Special Dispatches To The Delta" "Brilliant Victory" "The Federal Badly Whipped by Gen. Pillow" "From Lincolndom Via Norfolk".
Also: "Latest From Fort Donelson" and on page 3: "Battle of Belmont--Official Report taking 1 1/2 columns, and more. The bkpg. is mostly taken up with ads, one of which is headed: "Negroes For Sale".
Four pages, a bit irregular at the spine, even toning, nice condition.

Truly Confederate newspapers from New Orleans are very difficult to find, as Admiral Farragut entered the mouth of the Mississippi in mid-April, 1862 and finally took New Orleans on April 28. Shortly thereafter Benjamin Butler moved in and took control of the city, it surrendering without a fight. So "Confederate" issues from New Orleans are limited to those published between Louisiana's secession from the Union on January 26, 1861 and the end of April, 1862, just a brief 15 month period.