Home > Back to Search Results > The British take Quebec...
Click image to enlarge 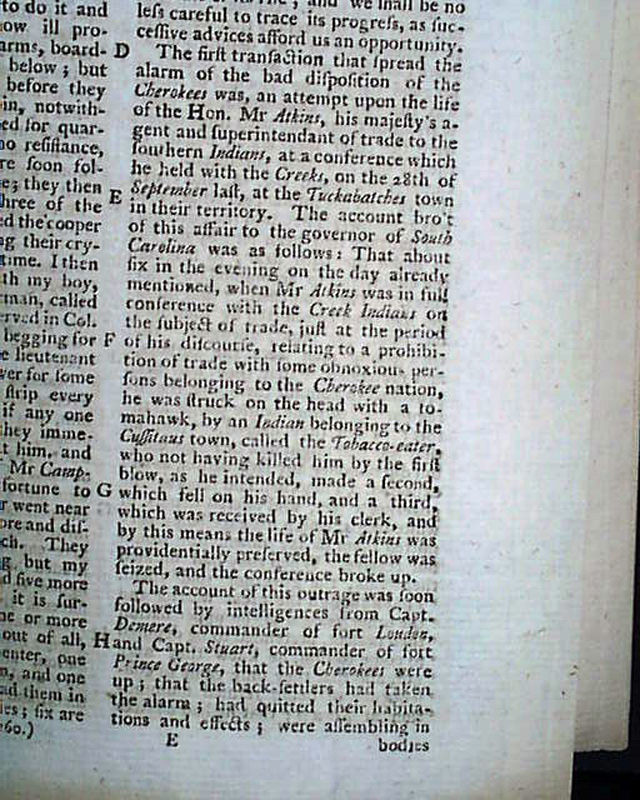 Item # 647077 GENTLEMAN'S MAGAZINE, London, January, 1760  A very nice magazine from the French & Indian War period from the "mother country" with a wide range of varied content including news of the day, political reports, literary items, and other unusual tidbits. This was the first periodical to use the word "magazine" in its title, having begun in 1731 and lasting until 1907.
Page 7 contains a small illustrations which accompanies the article: "Ancient Method of Representing the Trinity" (see photos)
Among the other articles within are: "Of the Great Duties of Religion" "Objections to the Chinese Being an Egyptian Colony" "History of a Dislocation of the Thigh" "Arguments against Distilling Spirits from Corn" "Ways of Evading the Marriage Act" "Mr. Sanger's Account of a new Comet" and more.
One article: "Gen. Wolfe's address to his Troops" begins: "The enemy's forces are now divided; great scarcity of provisions in their camp, universal discontent among the Canadians..." with more. This is from the day before the Battle of the Plains of Abraham. This battle would cause Quebec to surrender to the British a few days later.
Another article: "Rise of a New Indian War in N. America" which takes two pages (see photos for portions).
Near the back is the "Historical Chronicle" containing various news reports of the day which includes a section headed: "American Affairs" which includes reports from Charleston, South Carolina,  Halifax, and New York which contains various military events, including: "When Gen. Amherst heard of our success at Quebec he had destroyed the French vessels on Lake Champlain..." with more (see photos).
PLEASE NOTE: The map plate called for in this issue is present in this issue.
Complete in 48 pages, measures 5 1/2 by 8 1/2 inches in very good condition. Includes the full title/contents page featuring an engraving of St. John's Gate.