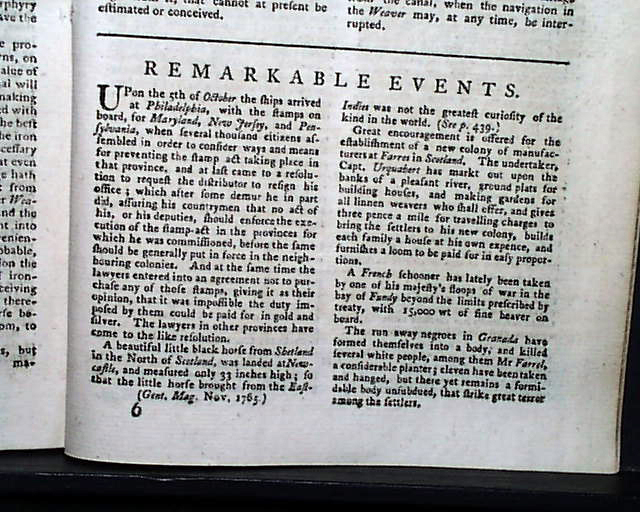 Item # 647035 THE GENTLEMAN'S MAGAZINE, London, November, 1765  Near the back under: "Remarkable Events" is a report of ships arriving at Philadelphia: "...with the stamps on board for Maryland, New Jersey and Pennsylvania, when several citizens assembled in order to consider ways and means for preventing the stamp act taking place in that province..." with more.
Further on is "The governor of New England, upon the arrival of the stamp paper for that province...sent a message to both houses of assembly desiring their advice & assistance in order to preserve the stampt papers safe and secure for his majesty's further orders..." with more.
Yet another report is headed: "An Account of the Proceedings of the late Assembly at Philadelphia which met on Sept. 21" which has a number of Resolves relating to the Stamp Act, prefaced with: "The house taking into consideration that an act of parliament has lately passed in England for imposing certain stamp duties and other duties on his majesty's subjects in America..." and more, followed by the various Resolves.
This issue includes both plates called for.
Complete in 48 pages, 5 by 8 1/2 inches, full title/contents page featuring an engraving of St. John's Gate, nice condition.