Home > Back to Search Results > Securing designs for building the Capitol in Washington... Washington & an Act of Congress...
Click image to enlarge 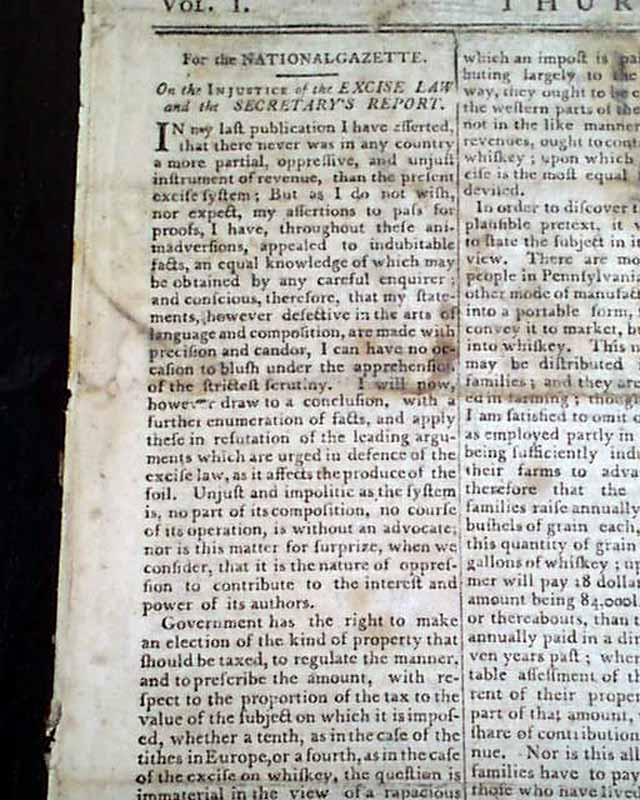 Securing designs for building the Capitol in Washington... Washington & an Act of Congress...

Most of the bkpg. is taken up with: "An Act for Raising a Farther Sum of Money for the Protection of the Frontiers, and for Other Purposes therein mentioned." which is signed in type by the President: G. Washington. Also a great ad headed: "Washington, in the Territory of Columbia - A Premium" noting: "Of a lot in this city to be designated by impartial judges and 500 dollars...by the commissioners of the Federal Buildings, to the person who, before the 15th day of July, 1792 shall produce to them the most approved plan...for a Capitol to be erected in this city...The building to be of brick, and to contain the following..." with details of what the Capitol is to contain (see). Great item!
The entire ftpg. is taken up with: "On the Injustice of the Excise Law & the Secretary's Report". Page 2 has: "On Friday last the governor of the state of Pennsylvania laid the corner-stone of the President's House in Ninth street. The following inscription is on the stone..."
An uncommon title. Four pages, some foxing & minor ftpg. rubbing, a few period ink notations do not deter, generally good condition.