Home > Back to Search Results > Texas joins the Confederacy... Just before the war begins...
Click image to enlarge 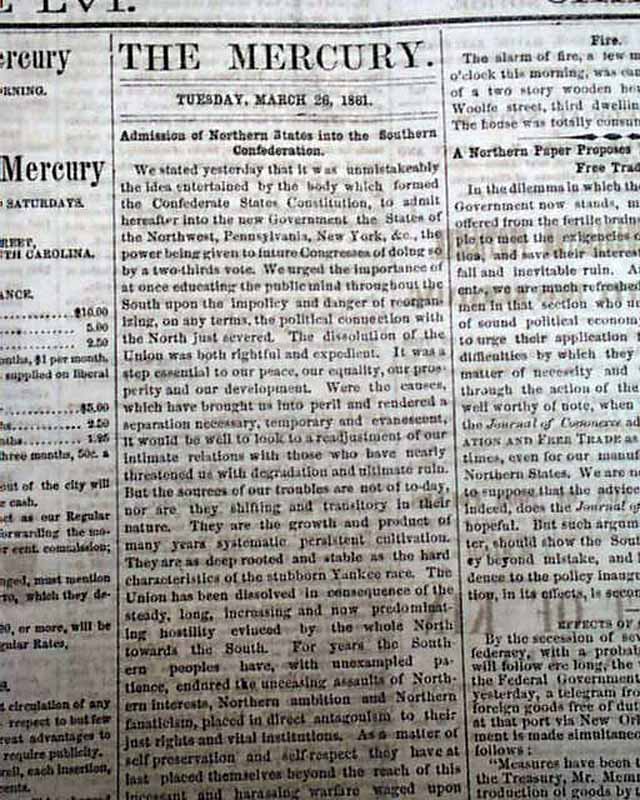 Texas joins the Confederacy... Just before the war begins...

* From the origin of the Civil War just prior to outbreak

South Carolina was the first state to secede from the Union which it did on Dec. 20, 1860. Plus the war began in Charleston harbor with the bombing of Fort Sumter just a few weeks after the date of this issue. The front page includes: "Admission of Northern States into the Southern Confederation" "How Charleston Looks in the Eye of a Yankee" "News From Pensacola" and other items. Inside has: "The Convention of South Carolina" in which they will discuss adopting the Confederate Constitution. There is also a nearly half column notice: "Loan For the Defence Of The Confederate States" and "Loan for the Military Defence of The State", and "The Prospects of the Southern Confederacy" "Release of the New York Vessels Seized at Savannah" and more.
The back page has: "Pecuniary Effects of Secession at the South" and also twelve Acts of Resolutions of the Confederate Congress including one: "...to Admit Texas as Member of the Confederate States of America". Most relate to the coming war. Each is signed in type by: Jefferson Davis.
Four pages, large folio size, nice condition. Folder size noted is for the issue folded in half.