Home > Back to Search Results > Fight for the Equal Rights Amendment begins...
Click image to enlarge 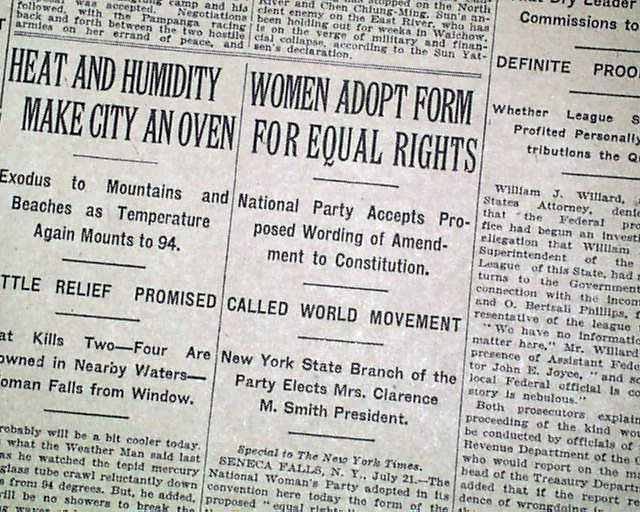 Page one has significant reporting from Seneca Falls, New York, site of the Woman's Rights convention which was celebrating the 75th anniversary of the first woman's rights convention held in 1848.
The one column headlines read: "WOMEN ADOPT FORM FOR EQUAL RIGHTS" "National Party Accepts Proposed Wording of Amendment to Constitution" "Called World Movement" "New York State Branch of the Party Elects Mrs. Clarence M. Smith President". This was the beginning of a 49 year struggle to get the amendment passed, introduced in every session of Congress since 1923 until it was approved--in reworded form--in 1972. The coverage takes three-quarters of a column on the front page and carries over to page 4. A notable report in the ERA efforts.
The issue is the complete Sunday edition with over 100 pages & all 9 sections, disbound, very nice, clean condition.